Some photos of the amazing sun halo hovering over NYC 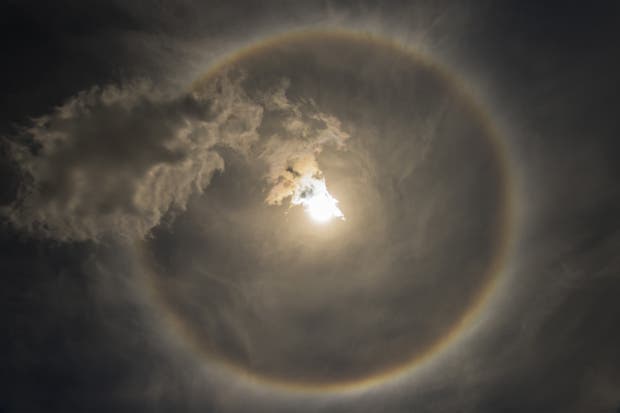 Yesterday, residents in many parts of the US were treated to a wonderful sight as the sun became wrapped in a rainbow halo. Like a brilliant all seeing eye, the sun cast its rays from a most privileged position prompting some unsuspecting people to believe an alien invasion is nigh. ZME Science folks, however, know better.

This is all but a meteorological phenomenon, known as a sun halo and it’s not that rare after all. This optical phenomenon can occur both around the sun and the moon, and is produced when tiny ice crystals contained in high cirrostratus clouds get hit by the sun’s light. Because of the hexagonal structure of the ice crystal , these particles refract light twice (on the way in and way out) bending the light approximately 22-degrees from its intended path and producing a ring of light around the sun that goes from red (~21.54°) on the inside to blue (~22.37°) on the outside.  This is why the phenomenon is also sometimes referred to as a 22-degree halo.

Here are some fantastic shots of the 22-degree halo captured by photographer Richard Silver over New York City [via petapixel].