by Tibi Puiu
in Physics, Studies
Reading Time: 3 mins read
A A
Share on FacebookShare on TwitterSubmit to Reddit

Dmitri Krioukov, a physicist at University of California in San Diego, was recently fined by a police officer for allegedly driving through a stop sign. Confident that he did nothing of the sorts, Krioukov sought justice like most of us would, in court that is, however during the hearing he presented a somewhat atypical piece of evidence – a mathematical paper, dubbed “The Proof of Innocence”. The physicists managed to convince the judge that the laws of angular and linear motion caused the officer to think he saw something he didn’t actually see, and thus manage to avoid the $400 traffic ticket. 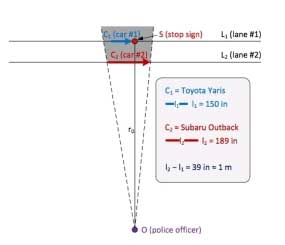 The four page paper was even published in the journal Popular Physics. In his study, Krioukov explains that the officer who issued him a ticket had his sense of perception deceived by combination of three circumstances which induced a physical phenomena. He explains in his abstract:

“[In this paper], we show that if a car stops at a stop sign, an observer, e.g., a police officer, located at a certain distance perpendicular to the car trajectory, must have an illusion that the car does not stop, if the following three conditions are satisfied: (1) The observer measures not the linear but angular speed of the car; (2) The car decelerates and subsequently accelerates relatively fast; and (3) There is a short-time obstruction of the observer’s view of the car by an external object, e.g., another car, at the moment when both cars are near the stop sign.”

Unfortunately for Krioukov, all of these three circumstances occurred the night he got pulled over. The police officer was stationed 30 meters away from the red light stop, perpendicularly facing the physicists’ car. Apparently, Krioukov had a bad case of the cold so he accidentetly slammed the break too hard and then accelerated after the green light. Finally, another car partially blocked the officer’s view of Krioukov’s car momentarily, so the officer could have missed the brief yet crucial timing of his stop. All of these sound a bit preposterous, but really what judge in the world wouldn’t have canceled his ticket after such an articulated, scientifically irrefutable case? The amount of work alone, would have sufficed – his paper even had a load of graphs (everybody likes graphs!), like one for the case of constant linear velocity through a stop sign (illegal) and another for a quick stop at the sign before accelerating back up to speed (legal).

“Therefore my argument in the court went as follows: that what he saw would be easily confused by the angle of speed of this hypothetical object that failed to stop at the stop sign. And therefore, what he saw did not properly reflect reality, which was completely different,” Krioukov said.

Curious to see if any similar cases will pop-up now as Krioukov’s paper, which is mentioned in the abstract as “a way to fight your traffic tickets, is readily available to the public for free.