by Henry Conrad
in Biology, News, Physics
Reading Time: 3 mins read
A A
Share on FacebookShare on TwitterSubmit to Reddit

The tropical rainforests of Central and South America aren’t threatened only by deforestation – they are also overrun by lianas, parasitic woody vines that clamber up trees and smother the forest canopy as they reach for sunlight. But the vines may actually help the trees in a way – scientists suspect they may in fact act as lightning rods. 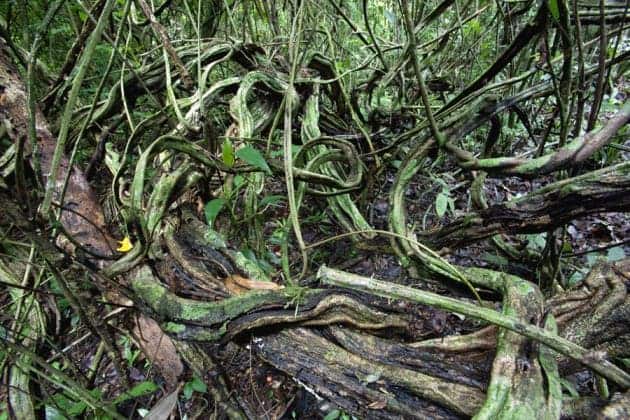 Understanding how this works could prove to be instrumental in predicting how the rainforests will change in the coming years, especially given the predicted effects of climate change on both lightning and lianas. This is so important that in July, a group led by Steve Yanoviak, an ecologist at the University of Louisville in Kentucky, will head to Barro Colorado Island in Panama to begin a two-year study of lianas’ potentially protective role in the environment.

“Nobody has ever thought of lianas as anything but a structural parasite,” says Yanoviak. “But they might have this unforeseen secondary effect of protecting trees against strikes.”

Although in many areas of the world, lightning often sparks extremely dangerous forest fires, in the moist tropical forests of Panama, there is little risk of a forest fire. Instead, what lightning does is kill individual trees – something which seems to be not such a big deal. However, Yanoviak believes this could actually be quite important, especially in the context of climate change.

As the climate continues to warm more and more, droughts tend to become more and more pronounced, and the risk of lightning-triggered fires in tropical forests could increase; nobody has studied this yet.

Studies have shown that tropical forests are dealing with a massive liana invasion – by 2007, 75% of Barro Colorado Island’s trees were covered with lianas, up from 32% in 1968. Lianas are very opportunistic, taking advantage of any disturbance, taking over quickly when a fallen tree leaves a gap in the canopy and climbing higher and higher to reach the light.

Yanoviak’s initial studies have revealed that vines have lower resistance to electricity than tree branches, which means that they could serve as lightning rods, protecting the trees. Mark Cochrane, an ecologist at South Dakota State University in Brookings is excited by this idea:

“It’s an interesting hypothesis,” says Cochrane, who is not involved in the study. “But the only way the vines would shield the tree is if their conductivity was so much higher that almost all of the current flowed through the lianas.”

This seems to be indeed the key question, which even Yanoviak acknowledges. But, in his two year study period, he’ll have plenty of time to figure that out.

“At that scale they may not matter, but we don’t know that yet,” he says. “It could be that lightning is such a trivial agent of mortality that it doesn’t matter, but at least we’ll know.”