Inside the physics of a mosh pit

by Mihai Andrei
in Mathematics, Physics

Physics and heavy metal may not have much in common, but Matt Bierbaum and Jesse Silverberg have found a connection. Both of them are graduate students at Cornell University – and both of them love heavy metal and headbanging. 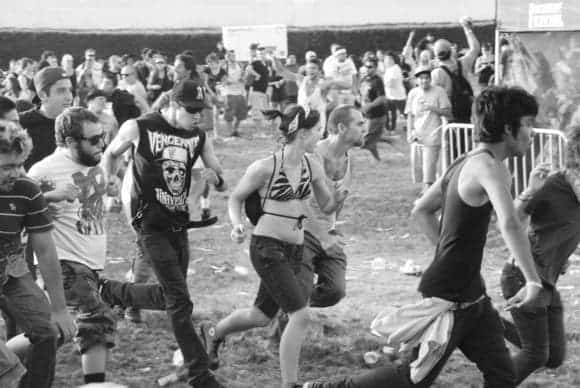 It all started when Silverberg, who really loves rocking out, took his girlfriend to a metal concert.

“Usually I would jump in the mosh pit,” he says. “But this time I wanted her to be safe and have a good time, so we stayed out on the side and watched things from there.”

While he was watching, however, he started to see some patterns which reminded him of molecules moving inside a gas.

“It was basically just this random mess of collisions, which is essentially how you want to think about the gas in the air that we breathe,” he says.

Physicists have long before written down the laws which describe this kind of motion, so Silverberg set out to see if they actually describe how people act in mosh pits. An extensive study process emerged, which involved going to as many metal concerts as possible and studying videos from Youtube (the work scientists do…). However, what I really like about this study – no tax dollars went toward buying concert tickets — the study is a labor of love.

Using just a few variables (such as how fast people moved and how dense the crowd was), Bierbaum and Silverberg created a mathematical model that actually reproduces mosh pits, circle pits and other common collective motions that take place at metal concerts. You can actually play with their exact model here.

But here comes the interesting part; of course, people in the mosh pit don’t think about obeying certain rules – they just instinctively do so. The same thing is done by of flocks birds and schools of fish – and even car drivers. Working on this kind of model could even improve how people act in emergency panic cases.

“We hope that this will provide a lens into looking at other extreme situations such as riots and protests and escape panic,” Bierbaum says.

The model was presented at this week’s March meeting of the American Physical Society. Hopefully, they wil continue their research – and keep rocking on.