by Mihai Andrei
in Animals, Offbeat, Physics
Reading Time: 3 mins read
A A
Share on FacebookShare on TwitterSubmit to Reddit

Birds may not be the smartest bunch out there, but man do they know how to navigate! Pigeons can get around towns and even  continents with stunning accuracy – except for a particular spot in New York. 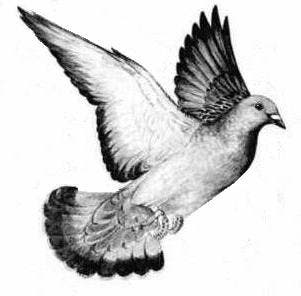 Whenever homing pigeons were launched from that particular spot, they would always get lost. They could easily go from Europe to Asia and Africa, but that particular area was like a Bermuda Triangle to them. But now, new research suggests that birds are using low frequency sounds to find their way around – and they cannot hear the rumble at this US location.

In order to navigate, they use infrasound—low-level background noise in our atmosphere—to fly by “images” they hear, practically creating acoustic maps of the environment. Scientists have long suspected that birds use this method to for navigation, but until U.S. Geological Survey geophysicist Jonathan Hagstrum in Menlo Park, California, became intrigued by the unexplained loss of almost 60,000 pigeons during a race from France to England in 1997, no one actually pinpointed the phenomena. The race went bust just as the birds were crossing the route of a Concorde, and Hagstrum wanted to know why.

“When I realized the birds in that race were on the same flight path as the Concorde, I knew it had to be infrasound,” he says.

Concorde airplanes are now retired, but they were the fastest commercial airplanes to ever fly, traveling with speeds faster than the speed of sound, generating a sonic boom in the process – a sonic boom which interfered with the birds’ navigation.

In a paper published today in The Journal of Experimental Biology, Hagstrum correlates the trajectory of sound waves at release sites with the pigeons’ flight performance. He also showed that at that particular site in New York, the space geometry and background rumble covers the sounds used by birds.

“Jersey Hill was a bad spot for Cornell birds,” Hagstrum says. “The geometry of the area conspired to create a sound shadow.” On the single day in August 1969 that the birds returned home, there was a temperature inversion that bounced sound back to the release site, allowing the pigeons to navigate.

What’s surprising is that this study came from a geophysicist – not the typical area of activity for him; however, other researchers were thrilled by the results.

“I think it’s very convincing evidence that infrasound is a component of information birds use,” says Alfred Bedard, a physicist at the Cooperative Institute for Research in Environmental Sciences in Boulder, Colorado, who wasn’t involved in the study. “The open area is what infrasound they find most useful.” Still, “these results aren’t surprising,” he says. “If creatures have information in their environment that’s important to their survival, they would sense it.”