Excitons observed in action for the first time

by Mihai Andrei
in Nanotechnology, News, Physics
Reading Time: 3 mins read
A A
Share on FacebookShare on TwitterSubmit to Reddit

A technique developed by MIT researchers reveals the motion of energy-carrying quasiparticles (excitons) in solid material. Let’s work that out in common English. 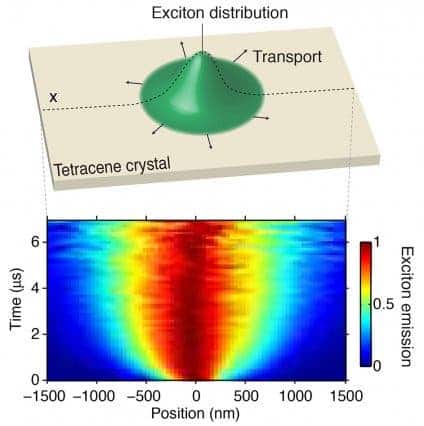 Quasiparticles aren’t technically particles, but they act like they are. It’s hard to give a definition without going into more complicated physics here, but a quasiparticle is a disturbance, in a medium, that behaves as a particle and that may conveniently be regarded as one. They occur when a microscopically complicated system behaves as if it were particle. Excitons are quasiparticles responsible for the transfer of energy within devices such as solar cells, LEDs, and semiconductor circuits. They have been theoretically understood for decades (at least generally), but they have never been observed in practice – until now, that is.

Now scientists at MIT and the City University of New York have achieved that feat, imaging excitons’ motions directly. This doesn’t only provide valuable insight into natural energy-transfer processes such as photosynthesis, but could also have direct applications in electronics and renewable solar energy. MIT postdocs Gleb Akselrod and Parag Deotare, professors Vladimir Bulovic and Marc Baldo, and four others describe their discovery in Nature Communications.

They emphasized that studying excitons could prove to be valuable soon rather than later.

“Excitons are at the heart of devices that are relevant to modern technology,” Akselrod explains: The particles determine how energy moves at the nanoscale. “The efficiency of devices such as photovoltaics and LEDs depends on how well excitons move within the material,” he adds.

The most interesting behavior is when an exciton, which acts as if it were a particle, pairs an electron, which carries a negative charge, with a place where an electron has been removed, known as a hole. The result is that the system has no electrical charge, but it does carry energy. That process happens a lot in solar energy: in a solar cell, an incoming photon may strike an electron, kicking it to a higher energy level. The energy is propagated through an exciton – chargeless, but still carrying energy.

“People always assumed certain behavior of the excitons,” Deotare says. Now, using this new technique — which combines optical microscopy with the use of particular organic compounds that make the energy of excitons visible — “we can directly say what kind of behavior the excitons were moving around with.” This advance provided the researchers with the ability to observe which of two possible kinds of “hopping” motion was actually taking place.

The good thing is that while this method was highly innovative, it’s not really that complicated or expensive. Scientists explain it to spread widely in labs throughout the world.

“It’s a very simple technique, once people learn about it,” Akselrod says, “and the equipment required is not that expensive.”