Fun mathematics of domino chain reactions: could a tiny domino end up to topple a skyscraper-sized one? Yes

by Tibi Puiu
in Physics, Studies
Reading Time: 3 mins read
A A
Share on FacebookShare on TwitterSubmit to Reddit 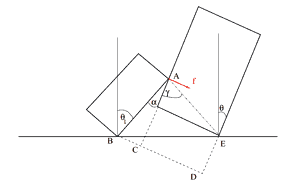 Besides being a great family time activity and an awesome display of art for some who have way too much time on their hands, dominos are also a great mathematics exercise. Although most dominos are the same size, it’s well documented that the first domino piece can topple a second larger domino piece, which in term can topple a greater than the second third domino piece and so on in a chain reaction. An interesting physics and mathematics question pop-up: how big can the succeeding domino piece be in order for this to work? J M J van Leeuwen from Leiden University in The Netherland took up the challenge and developed a mathematical model to answer this question.

At first glance the problem might seem a trifle, but finding the maximum growth factor in the domino chain reaction ins’t quite a walk in the park. In this fantastic video below you can see how a tiny domino piece only a few millimeters tall ultimately topples over a roughly one meter high domino, all through a step by step x1.5 incremental increase in size of the pieces and space between them.

How so? The secret lies in energy. When a domino piece is stationary it has a certain potential energy. The energy required to topple a domino is smaller than its potential energy which gets released when it falls. This difference in energy causes a force amplification that can be used to ultimately topple larger dominos.

If Leeuwen were to base his calculations on real world dynamics, he would’ve ended up with some impossible to compute equations – not with his resources at least. So a set of mathematical simplification were made – the friction between the ground and the dominoes is effectively infinite so that they cannot slide;  the collisions are fully inelastic so the dominoes stay in contact with each other when they collide; once in contact with each other, the dominoes slide frictionlessly over each other.

That might not be close to reality, but it’s good enough to actually get scientific answer. Thus, with these assumptions in mind and an optimal spacing between each domino, Leeuwen found that for a chain reaction to be successful  each succeeding domino can be no more than about twice as big as the previous one – a growth factor of two. In the video, its producers used a x1.5 factor, apparently this could have been greater. Even Leeuwen admits, however, that a growth factor of 2 is highly unrealistic and might never hold in practice since his assumptions will never be valid in real life.

Still, the exercise is extremely appealing. Even with a growth factor of let’s say 1.7, an initial 10 millimeter domino piece could end up eventually toppling a domino piece the size of the empire state building after 244 pieces, for this simplified model at least. Wow, right?

Leeuwen’s model was described in a paper in the journal  Popular Physics.