Medical devices powered by your ear

by Mihai Andrei
in Biology, Health & Medicine, Physics
Reading Time: 2 mins read
A A
Share on FacebookShare on TwitterSubmit to Reddit

Your ear is a fascinating place – seriously, that’s not some psychotic pick up line. Deep in the inner ear of mammals lies a natural battery, a place filled with ions that produces an electrical potential which drives your neural impulses. Now, a team of researchers have shown this battery can power a device without impairing hearing or creating any other problem. 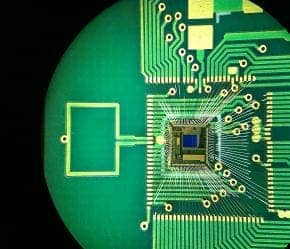 The team suggested devices which could monitor the biological activity in the ear or provide hearing benefits for the impaired. In the experiments, biologists and physicists from the Massachusetts Eye and Ear Infirmary (MEEI) and the Harvard-MIT Division of Health Sciences and Technology (HST) implanted electrodes in these biological batteries of guinea pigs. Attached to the electrons there were low-power electronic devices which monitored the chemical activity inside the ear. After the devices were implanted, the guinea pigs suffered no hear issues whatsoever, and the devices were able to transmit information via wi-fi.

“In the past, people have thought that the space where the high potential is located is inaccessible for implantable devices, because potentially it’s very dangerous if you encroach on it,” Stankovic says. “We have known for 60 years that this battery exists and that it’s really important for normal hearing, but nobody has attempted to use this battery to power useful electronics.”

Indeed, altering how this extremely effective mechanism works could be devastating. The ear converts sounds (via the vibration of the air drum) into an electrochemical signal that can be processed by the brain. This biological battery is the source of the current.

“The fact that you can generate the power for a low voltage from the cochlea itself raises the possibility of using that as a power source to drive a cochlear implant,” Megerian says. “Imagine if we were able to measure that voltage in various disease states. There would potentially be a diagnostic algorithm for aberrations in that electrical output. I’m not ready to say that the present iteration of this technology is ready,” Megerian cautions. But he adds that, “If we could tap into the natural power source of the cochlea, it could potentially be a driver behind the amplification technology of the future.”

The research was published in Nature Biology