by Mihai Andrei
in Biology, Physics
Reading Time: 3 mins read
A A
Share on FacebookShare on TwitterSubmit to Reddit

I sometimes found myself shocked when I see just how brightly colored some flowers, insects, or even grass can get. But this little, relatively obscure plant has managed to find a fantastic way to send out a signal to every bird out there – and it has done so without using any pigment. 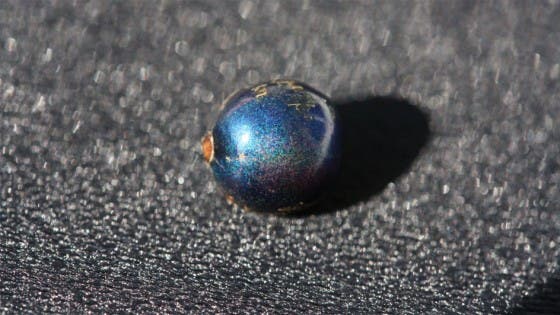 Most of the colored animals and plants we see around today are colored due to pigmentation; a pigment is a material that changes the color of reflected or transmitted light as the result of wavelength-selective absorption – sounds fancy, but it’s quite common. However, there are examples, such as the scarab and the peacock, that don’t use pigments, instead relying on what is called a structural colour.

I described structural color in a previous post, about an ancient butterfly, but if you didn’t get to read that, I’ll go through it again; such colors are caused by interference, and the effects are produced when a material is scored with fine parallel lines, formed of one or more parallel thin layers, or otherwise composed of microstructures on the scale of the color’s wavelength.

Typically, fruits are made of cells, surrounded by membranes containing cellulose; however, in the case of the Pollia condensata fruit the cellulose is laid down in layers, in an asymmetrical, chiral structure that interacts with light and provides selective reflection for a single color – blue.

Using this technique, Pollia condensata manages to trick the birds: although it provides practically no nutritional value, birds are attracted to its bright coloring and spread its seeds. Dr Beverley Glover from the University of Cambridge’s Department of Plant Sciences, who jointly led the research, explains:

“This obscure little plant has hit on a fantastic way of making an irresistible shiny, sparkly, multi-coloured, iridescent signal to every bird in the vicinity, without wasting any of its precious photosynthetic reserves on bird food. Evolution is very smart!”

Also, because it is constructed this way, the fruit doesn’t lose its color in time – samples collected in the 19th century were as bright and shiny as the ones today, yielding significant potential for future applications.

“By taking inspiration from nature, it is possible to obtain smart multifunctional materials using sustainable routes with abundant and cheap materials like cellulose.”, said Dr Silvia Vignolini, lead author on the paper from the University of Cambridge’s Department of Physics. “We believe that using cellulose to create colored materials can lead to many industrial applications. As an example, edible cellulose-based nanostructures with structural color can be used as substitutes for toxic dyes and colorants in food. Moreover, the fact that the processes involved in cellulose extraction and manipulation are already used in the paper industry facilitates the use of such materials for industrial applications such as security labeling or cosmetics.”