by Mihai Andrei
in Biology, Physics

If you know your physics (or optics, to be more specific), you’ve probably heard a lot about Fermat’s principle (or the principle of least time). Basically, what it states is that the path taken between two points by a ray of light is the path that can be traversed in the least time. A ray of light will always travel from A to B on the path which takes the least time, or other put, it will follow the fastest, not shortest path. Ok, so where do ants come in? 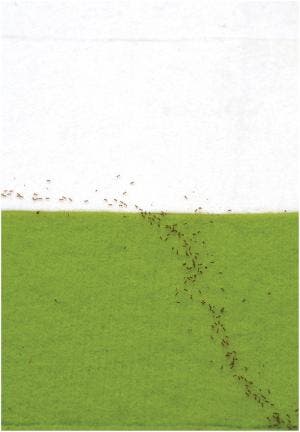 Well, apparently, ants follow Fermat’s principle as well. This is an issue when ants are forced to travel on two different surfaces, where they walk faster on one than the other. As this new study showed, in this kind of situation ants behave… just like light does.

Jan Oettler and his team, which included members from China, Germany and France compared the paths ants follow compared to those followed by ligh in the same conditions. The scientists experimentally studied the behavior of the little fire ant, Wasmannia auropunctata, one of the world’s 100 most invasive species.

They took several colonies of ants, put them in boxes and placed food in the corner opposite from the entrance. The surface of each foraging arena was split in half, and each half was covered by a different material; here, researchers used several different materials which differently affected the ants’ movement speed: rough polyester felt (1.73 mm/s), smooth polyester felt (2.97 mm/s), and polyethylene glass (4.89 mm/s). 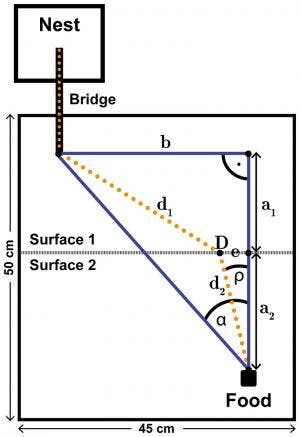 So given the geometry of the setting and the ants’ movement speeds on the different materials, they handily calculated the trajectory which they would follow if they acted according to the Fermat principle. The researchers found that the ants’ paths closely matched those predicted – and the ants knew way better than taking the shortest path.

“We found that a general rule applies to a dynamic system that relies solely on communication (pheromones) and social cooperation,” Oettler told Phys.org. “This system depends on two features. One is routing information that decays over time and needs to be refreshed, thus making the system flexible. And second on behavioral flexibility by the worker ants that carry this information. A path can only be adjusted by worker ants that do not follow this path, but rather take alternative routes (that they advertise), which may be faster (or slower) than the already established path.”

Researchers note that humans also follow Fermat’s principle – the most notable example being a lifeguard, that instinctively follows the shortest beach + water path to reach the drowning swimmer. But this is only the first step in a complex journey, which aims to understand the complex processes which govern ant movements in different conditions.