‘Punk-haired’ turtle that breathes through its butt is seriously endangered

But we humans are the real punks here.. .

An astonishing-looking turtle that sports a green mohawk and breathes through its anus has been added to the list of the world’s most vulnerable reptiles.

The Mary river turtle (Elusor macrurus) is a 40 cm long reptile only found on the Mary river in Queensland, Australia. It has a smooth, streamlined, dull and unpatterned shell and dark eyes. However, its most defining feature is the crazy-looking ‘hair’ that covers the reptile’s head and body — this is, in fact, algae.

But(t), that’s not the oddest thing about this turtle — that distinction goes to its respiratory system. The Mary river turtle is what scientists call a cloacal ventilator, meaning it breathes through its anus. Cloacal ventilation allows the species to live underwater for days a time, as long as the water is flowing and well oxygenated.

They might look punkish, but don’t let the appearance fool you — they’re actually very docile creatures, which have traditionally been kept as pets (however, males can’t be kept together because they’re very aggressive to each other and remain separate in the wild). In fact, it was pet collectors who have raided the turtles’ nests in the 1960s and 1970s that have contributed the most the species’ downfall — they used to call them ‘penny turtles.’ Alas, these raids have removed an entire generation of turtles from the wild, leaving behind a reduced, aging population. By one account, their numbers are down 95% from the historic baseline.

Other threats to the Mary river turtle include egg predation from feral animals, increased runoff, siltation and pollution of its aquatic habitat, and the direct and indirect effects of grazing activities. 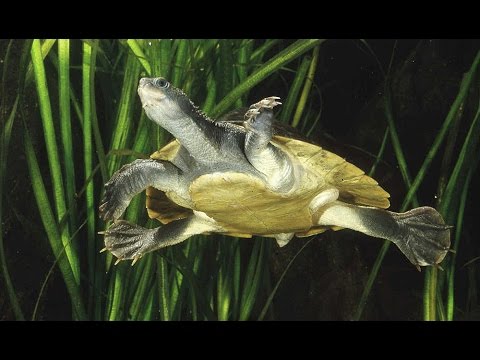 According to a new list compiled by the Zoological Society of London (ZSL), the Mary river turtle is now ranked 30th among the most vulnerable reptile species. Each species is given a score based on the extinction risk and the evolutionary isolation (uniqueness). Topping the list is the Madagascar big-headed turtle (Erymnochelys madagascariensis).

“Reptiles often receive the short end of the stick in conservation terms, compared with the likes of birds and mammals,” said Rikki Gumbs, co-ordinator of ZSL’s Evolutionarily Distinct and Globally Endangered (EDGE) list for reptiles.

“The Edge reptiles list highlights just how unique, vulnerable and amazing these creatures really are.”

Indeed, the real punks here are us humans for letting these docile reptiles come so close to oblivion. But all is not lost just yet — conservation efforts might turn the odds in the endangered species’ favor.

“Just as with tigers, rhinos, and elephants, it is vital we do our utmost to save these unique and too often overlooked animals. Many Edge reptiles are the sole survivors of ancient lineages, whose branches of the tree of life stretch back to the age of the dinosaurs. If we lose these species there will be nothing like them left on Earth,” Gumbs added.

Update: Initial headline erroneously stated that the Mary river turtle is from New Zealand, when it is, in fact, from Australia.