Paper centrifuge can separate blood into plasma in under two minutes, all manually. It weighs 2 grams and costs ¢20

by Tibi Puiu
in News
Reading Time: 4 mins read
A A

Using cardboard discs, fishing line, drinking straws and some glue, researchers from Stanford devised a blood separating centrifuge that’s almost as effective as lab-grade equipment. it can separate blood samples into corpuscles and plasma in less than two minutes and the cost — well you’ve seen what it’s made of.

This ‘poor man’s centrifuge’ should prove extremely useful in developing countries, particularly regions in Africa where some centrifuges are used are doorstops since there’s rarely electricity to power them, according to Manu Prakash, a physical biologist at Stanford University in California and a 2016 MacArthur ‘genius grant’ winner.

“There are more than a billion people around the world who have no infrastructure, no roads, no electricity. I realized that if we wanted to solve a critical problem like malaria diagnosis, we needed to design a human-powered centrifuge that costs less than a cup of coffee,” says Prakash, who was senior author on the study published in Nature Biomedical Engineering.

Prakash’s centrifuge, which he calls the ‘paperfuge’, almost looks like a joke, a children’s toy. In many ways, you wouldn’t be wrong calling it a toy. After all, its design is based on the whirligig — a toy made out of a punctured disc with string threaded through the hole. As you pull the string, the disc will frenetically start spinning in one direction, and then in the opposite direction as the string unwinds. Versions of this toy have been found almost everywhere in the world, the oldest one dating from 3,300BC.

Prakash and colleagues explored various designs that can be operated manually and cost little money. They eventually settled on the whirligig, impressed by its ability to spin at 10,000 r.pm, which is comparable to commercial-grade centrifuges.

Being scientists, though, the team sought ways to improve its performance. First, a mathematical analysis of the whirligig’s physics was performed. Countless hours of spinning cardboard disks were recorded but the effort eventually paid off. The video footage revealed that not only do the strings twist around each other as they wind and unwind, but also form coils which surprisingly look similar to DNA helix structure.

After solving the equations that describe the coiling motion, the scientists came up with the dimensions an ideal whirligig needs to have. Apparently, if you tweak things like the disc’s size or the string’s thickness, the resulting whirligig could theoretically spin a million times per minute or 100 times more efficiently than the initial versions Prakash tried out. Thing is, no human can spin a disk that fast — you’d need a machine to come close to this theoretical limit. Even so, the new design could spin at 125,000 r.p.m, according to live experiments made in the lab. This makes the paperfuge the fastest rotating device powered by human motion, and Prakash has the Guiness World Records certificate to prove it.

The final paperfuge prototype consists of two cardboard discs, each 10cm across. On one of the disks, two 4cm-long drinking straws were glued to it with the outer ends sealed with glue. It’s inside the straw tubes that blood is centrifuged.  These add-ons reduced the spinning speed, though, now only 20,000 r.p.m but fast enough to separate plasma from blood in 1.5 minutes, and malaria parasites in 15 minutes. 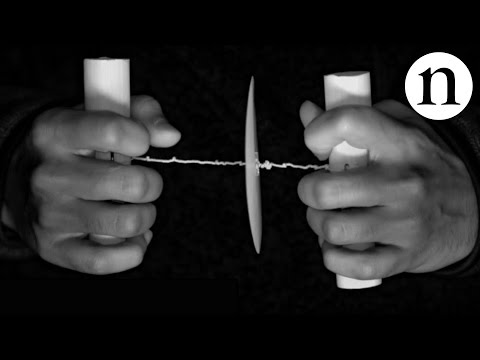 Soon, the Prakash lab in partnership PIVOT, a nonprofit from Boston, Massachusetts, will begin field trials in Madagascar where they will assess both the efficacy of the blood separation and the willingness of health workers to spin the paperfuges like crazy. Common sense says they have to do it. Separating blood samples is essential to diagnosing HIV, malaria and tuberculosis, among other things.

“We don’t know yet if the paperfuge will work,” says Matt Bonds, PIVOT cofounder and an economist at Harvard University in Cambridge, Massachusetts. “It would take a lot of evidence to convince people to abandon modern centrifuges, but having paperfuges available as an alternative could open up a world of new possibilities.”

Of course, once you have the blood separated you also need to have it analyzed. Luckily, the researchers already have us covered. We reported way back in 2014 how the PrakashLab at Stanford University essentially made functioning microscope out of a lens, battery and LED, which can be folded akin to an origami for under 1$ and in 10 minutes time.