A mysterious and alarming uptick in dangerous chlorine-based chemicals has been tracked down to eastern China.

by Tibi Puiu
in Climate, News, Physics, Space
Reading Time: 3 mins read
A A
Share on FacebookShare on TwitterSubmit to Reddit

In the late 1980s, the world was shocked to learn that human activity had created a gaping hole in the ozone layer above Antarctica. What happens next, however, was simply amazing: all UN countries agreed to ban the use of ozone-depleting chlorofluorocarbons (CFCs) under the Montreal Protocol.

Three decades later, the ozone layer has recovered dramatically and scientists expect the hole to completely patch up by 2060. But they also noticed that in recent years the levels of CFCs in the atmosphere weren’t changing as expected. Someone hasn’t been playing by the rules, and according to a new study, this is happening in eastern China.

At ground level, ozone (or smog) is a poisonous chemical often expelled by vehicle exhaust. High up in the stratosphere, ozone builds up at altitudes between 10 and 50 km where it acts as a shield against the harmful ultraviolet rays, which can cause cancer. Ozone holes occur naturally from cooling, but man-made chemicals — especially those containing chlorine — greatly accelerate their formation. Currently, the ozone hole above Antarctica is the size of North America.

In January 2018, researchers at NASA reported the first direct evidence that the ozone hole is recovering. They studied microwaves emissions that can identify and count trace gases even during the dark southern winter. According to the NASA researchers’ results, the ban on CFCs has resulted in about 20% less ozone depletion during the Antarctic winter compared to 2005. On average, chlorine levels are declining by about 0.8% annually, the authors reported in the Geophysical Research Letters. 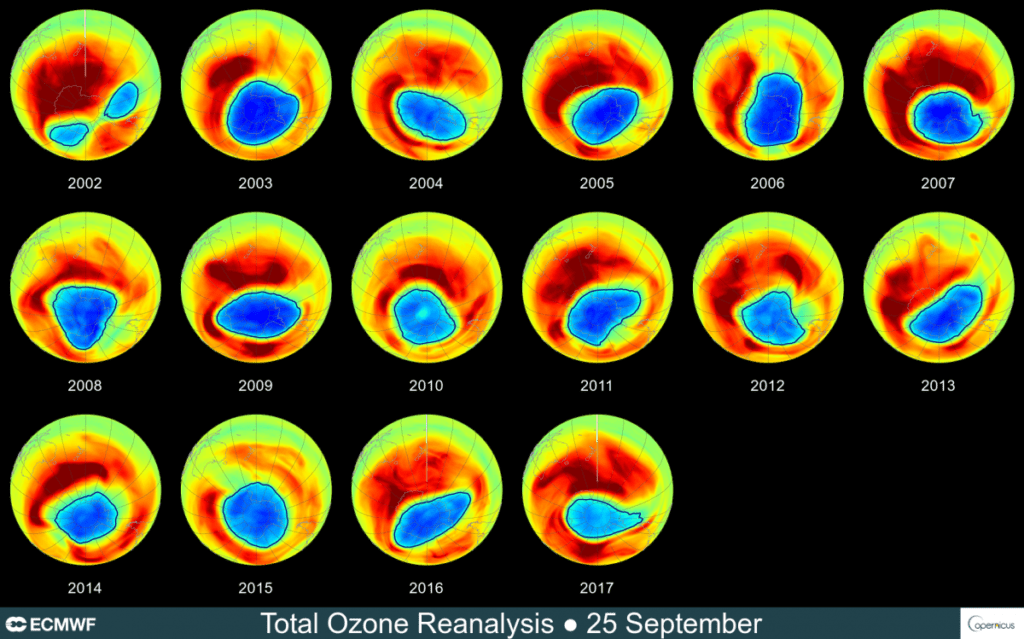 Considering the great challenges that had to be overcome to reach this level of global commitment, you can imagine how shocking it must have been to learn that there were signs of a trend reversal. That’s the case at least for CFC-11, one of the banned chemicals under the Montreal Protocol, which was used in refrigeration and the production of foams. Thanks to the global ban, CFC-11 levels have been declining year-to-year. However, in 2012, researchers noticed that the rate of decline of CFC-11 was slowing down which could only mean that someone somewhere was producing or emitting these chemicals which also trap 5,000 times more heat than CO2.

Many suspected China as the epicenter of this new pollution, but there wasn’t any official proof — until now. In an effort to pinpoint the source of the new emissions, researchers at the University of Bristol, Kyungpook National University, and the Massachusetts Institute of Technology looked at air quality data from monitoring stations in Hawaii, Japan, and Korea. Analysis of this data suggested that China accounted for 40% to 60% of the global increase in trichlorofluoromethane, or CFC-11, emissions between 2014 and 2017. These emissions primarily came from the Chinese northeastern provinces of Shandong and Hebei, according to the study published in Nature.

In 2018, the New York Times published a report accusing some Chinese factories of disregarding the Montreal Protocol by employing CFC-11 in the manufacturing of refrigerants and foams because it is cheaper.

“Several considerations suggest that the increase in CFC-11 emissions from eastern mainland China is likely to be the result of new production and use, which is inconsistent with the Montreal Protocol agreement to phase out global chlorofluorocarbon production by 2010,” the scientists wrote in the abstract of the study.

Chinese authorities started to crack down on the illegal production and use of CFC-11 following international pressure. Now, the authors of the new study hope that their findings will help authorities narrow down the sources and locations of pollutions.