A ferocious predator actually enjoys a vegetarian snack from time to time.

Jaws would’ve been a heck of a lot less terrifying had it stared the bonnethead shark. According to a recent study, this shark enjoys a diet of bony fish, crabs, snails, and shrimp — but also seagrass. This makes it the first omnivorous shark that we know of.

For some time, biologists have been observing that bonnetheads (Sphyrna tiburo) ingest seagrass in addition to their favorite crustaceans and shellfish. However, because their stomach is almost identical to other meat-eating sharks, being highly specialized for a diet revolving around protein, scientists had always assumed the seagrass was consumed by accident.

But it seems like the bonnetheads really like seagrass, which they ingest for its nutritional value. This was proven by Samantha Leigh at the University of California Irvine and her colleagues, who ran a series of tests to determine how much of this seagrass diet could be digested. What an animal consumes is not necessarily the same as what it digests and retains nutrients from. 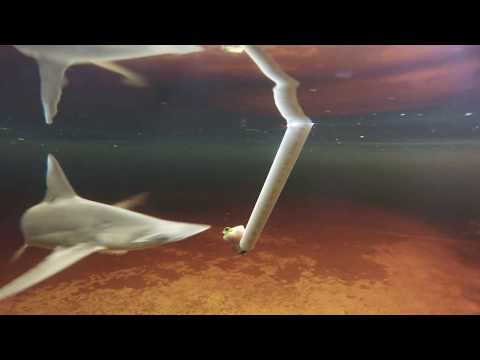 First, the researchers planted seagrass from Florida Bay in their lab. To track the plants along the food chain that would eventually reach the sharks, researchers added a specific carbon isotope to the water.

Five bonnetheads were served a diet made up of 90% seagrass and 10% squid in a controlled environment in the lab. Three weeks later, all the sharks had put on weight, suggesting that the animals must have derived calories from the plant-based diet.

To be sure, researchers ran a new series of tests, meant to measure how much of the plant matter was digested and how much of it simply passed through.

Blood tests found high levels of the carbon isotope in both the sharks’ bloodstream and liver, suggesting that the seagrass nutrients were being absorbed.

“Bonnethead sharks are not only consuming copious amount of seagrass but they are actually capable of digesting and assimilating seagrass nutrients, making them clear omnivores,” the researchers wrote in their study.

“This is the first species of shark ever to be shown to have an omnivorous digestive strategy.”

Approximately 4.9 million individuals swim in the coastal waters of the USA in the Atlantic and Gulf of Mexico. Their great numbers will force researchers to re-evaluate the role that bonnetheads play in seagrass meadows, which are critical ecosystems that provide habitat for thousands of fish species, filter the surrounding water, act as a sink for atmospheric CO2, and produce large quantities of oxygen.

“Considering bonnethead sharks as omnivores, rather than carnivores, in models of seagrass meadow function, and then testing the predictions of those models for management purposes, changes our understanding of the fluxes of nutrients and energy among trophic levels within each part of these ecosystems,” the authors wrote in the Proceedings of the Royal Society B.

The researchers aren’t sure when the bonnetheads started eating plants in their evolutionary history but it’s possible other shark species do it as well.