How many friends would a shark have on facebook?

Sharks have a reputation of solitary predators. They're not the life of the party, sort to say. One new research casts doubt on this assumption, though. The findings suggest that sharks, or at least Sand Tiger sharks, have a complex social structure not all that different in some instances from notoriously social mammals like dolphins, chimps or even humans.

by Tibi Puiu
in Biology, News

Sharks have a reputation of solitary predators. They’re not the life of the party, so to say; one new research casts doubt on this assumption, though. The findings suggest that sharks, or at least Sand Tiger sharks, have a complex social structure not all that different in some instances from highly social mammals like dolphins, chimps or even humans.

Tracking sharks is very difficult. Most studies follow sharks kept in pens or in a lab environment but the researchers at University of Delaware in Lewes used acoustic tags to track the movements of over 300 individual Sand Tiger sharks. The tracking was made in the wild and took a whole year.

For this reason, not a lot is known about how sharks behave in the wild. Every year Sand Tiger sharks undertake long migrations. This means they always appear seasonally – normally within a specific time period of several weeks – at the same places. In the summer, Sand Tigers congregate together in the shallow waters of the Delaware Bay. For the rest of the year, though, it’s all a black box for biologists.

The initial readings from only two sharks show that each individual encountered nearly 200 other sand tigers throughout the year, as well as several individuals from other shark species. In some instances, the same sharks were encountered multiple times throughout the year. Interestingly, the sharks congregate in groups but only in some locations and for a limited time. This is what the scientists called fission-fusion social behavior. 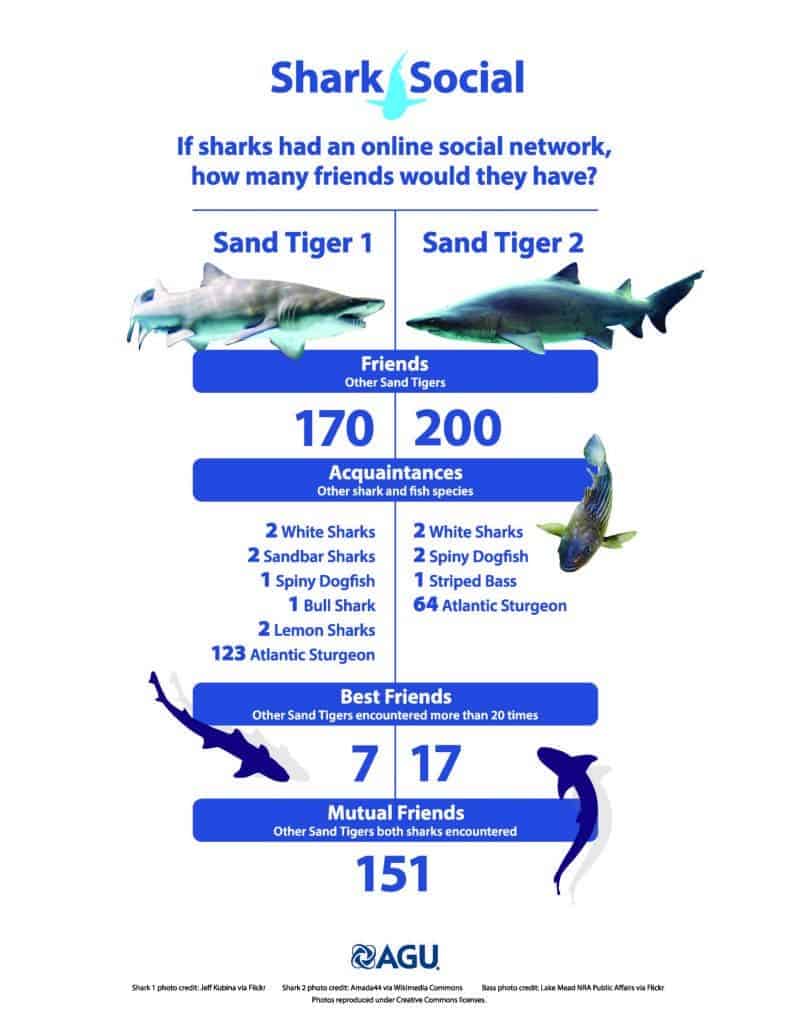 The researchers found it odd that encounters were lacking during early spring and winter. It’s thought that during these times, it’s better if the sharks venture solo or in very small groups because food stocks are limited.

“If you’re living with a group, there could be some kind of protection or information sharing that comes with being in that group,” said Danielle Haulsee, a PhD candidate in oceanography at the University of Delaware in Lewes. “But if there’s a lot of competition for food resources or mating resources, then it’s not beneficial anymore to be in a group, and you might swim away from your group and go off on your own.”

Over the last decades, Sand Tiger populations have seen a drastic decline. Though they looks pretty threatening, Sand Tigers are harmless. Alas, many are killed or chased away because they look dangerous. With their study, Haulsee and colleagues hope to fill in a lot of blanks. For instance, we don’t know yet if Sand Tigers congregate in groups based on family or other characteristics like sex or size. This information might prove invaluable for conservation efforts.

The initial findings will be shared at the 2016 Ocean Sciences Meeting.