The world is getting older: there are more people over 65 than under 5

This role reversal foretells a period of economic stagnation.

by Tibi Puiu
in News
Reading Time: 2 mins read
A A
Share on FacebookShare on TwitterSubmit to Reddit

For the first time in history, there are more people aged 65 or older than there are under the age of 5, Deutsche Bank reports. This role reversal is a consequence of decreased fertility rates throughout the world and improved access to healthcare, especially in wealthy countries, which has extended lifespans.

The Deutsche Bank analysis employed data from the United Nations, Haver Analytics, and the company’s own global research branch. According to the results, which are visually summarized in the graph below, the under-five population has remained relatively stagnant in the past two decades while the over-65 population has risen steadily. By the end of the century, there could five times as many people over 65 living in the world but fewer people under-five than there are today. 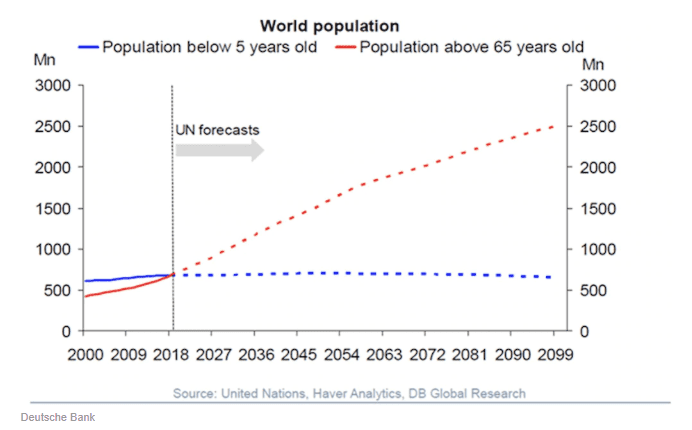 Economists at Deutsche Bank say that an aging population can lead to what’s called “secular stagnation”, a condition defined by low growth and stagnant inflation. During secular stagnation, savings rise and investments slow, causing the economy to stall. In order to avoid this market condition, fertility rates have to be above “replacement” levels, otherwise, there aren’t enough active, young people employed in the economy. In the United States, the fertility rate is around replacement levels, unlike Japan and China which are on a downward trend.

However, an aging population doesn’t necessarily have to lead to secular stagnation. The solution is to offset low fertility rates with higher productivity enabled by new technologies. Indeed, AIs and automation in manufacturing plants could dramatically improve GDP per capita. They will also replace many of today’s traditional jobs from truck drivers to clerks, which brings its own unique set of challenges. In other words, the future looks complicated.

From an environmental perspective, a decreased fertility rate looks beneficial. ZME Science reported earlier that the most impactful lifestyle change in terms of lowering your carbon footprint is, by far, having one fewer child. The ideal situation is to lower our carbon footprint to avoid catastrophic climate change while, at the same time, improving GDP. Again, the magic pill is technology — perhaps the kind that has yet to be invented.