Over $350mil in funding and an intricate digital reconstruction means Notre Dame could be hastly restored.

On Monday afternoon, the world was shocked by the sight of Notre Dame cathedral in flames. The iconic 850-year-old Paris landmark suffered extensive damage with all of its original medieval wooden roof falling to the fire, along with the 93-meter-tall spire that collapsed through the roof. But while the event is a cultural tragedy, there are good reasons to believe that the cathedral can be restored to its former glory almost exactly as it once stood, thanks to extensive interior and exterior 3D scans performed only a few years prior to the fire.

Notre Dame cathedral was built over a century between 1160 and 1260. Its ribbed roof was made up of hundreds of oak beams, some still dating back to the 13th century and measuring up to 110 meters long. The famous spire (flèche), however, was added much later during a restoration led by architect Eugène Viollet-le-Duc, which took place between 1845-1870. Viollet-le-Duc also added other elements such as the gargoyles. For instance, the most famous description of the cathedral in The Hunchback of Notre-Dame by French author Victor Hugo was quite different than what people who’ve seen it in person might remember because the book was written in 1831, before the restoration.

DETAILS: The Notre Dame Cathedral construction began in 1160 and ended in the 14th century. The fire began in the structure of the monument that dates back to the 13th century.

The monument is 850 years old and is visited by up to 50,000 people per day pic.twitter.com/ZjwFqYTrvq

#NotreDame
Huge fire sweeps through Notre Dame Cathedral in #Paris
Egulfed in flames on Monday afternoon,causing its main spire to collapse and raising fears for the future of the 850 year old building and its precious artworks. pic.twitter.com/PzSvAn3FMr

Hundreds of firefighters rushed to the scene where they managed to fully contain the blaze early the next morning. Experts are still assessing the full scope of the damage but what’s already clear is that the medieval wooden roof, whose once magnificent beams now look like used matchsticks, is completely destroyed. The spire, as well, has completely collapsed, and the once rose-round windows are now chared. Fortunately, most of the artworks and other valuable objects inside the church were evacuated. Notre Dame’s organ also survived, authorities reported.

#NotreDame fire: The roof and spire of the Paris landmark are destroyed, but the shell was saved from destruction. Here's a look at the destroyed section. pic.twitter.com/X9jLxH64aJ

The damage could have been much worse but luckily the cathedral’s stone walls still stand, making repairs much easier. In fact, if the walls had fallen, Paris authorities would have had to perform a reconstruction. And since Notre Dame cathedral is one of the most famous landmarks in the world, it not only exists in countless books, magazines, and blog posts, but also in the virtual space.

In 2015, a now-deceased architectural historian called Andrew Tallon performed an exact digital reconstruction of Notre Dame. Tallon used laser scanners to capture the entirety of the cathedral’s interior and exterior in billions of points of light. When combined, these clouds reveal a living structure. In a short video documentary, Tallon explained the process for National Geographic. 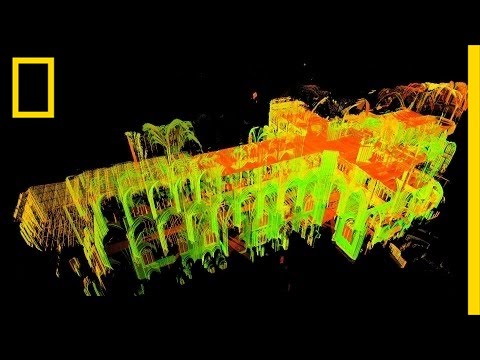 Tallon’s work might one day be used to restore Notre Dam to its former glory — and repair work might start very soon. In an address to the nation just before midnight, President Emmanuel Macron vowed that “we will rebuild this cathedral.”

Before the fire, Notre Dam was already under restoration as recent tourists might have noticed. Funding for this restoration proved to be rather challenging to source but with the wave of emotion around Monday’s fire, money doesn’t seem to be an issue anymore. After French officials announced plans to launch a national and international fundraiser, François-Henri Pinault, a French luxury magnate, said his family would donate $113 million, while Bernard Arnault, the richest man in Europe, pledged $226 million.

Combined with Tallon’s intricate digital reconstructions, these funds will help restore the architectural masterpiece to its original state — and likely very fast, too.