This could revolutionize how we build things both on Earth and other planets. 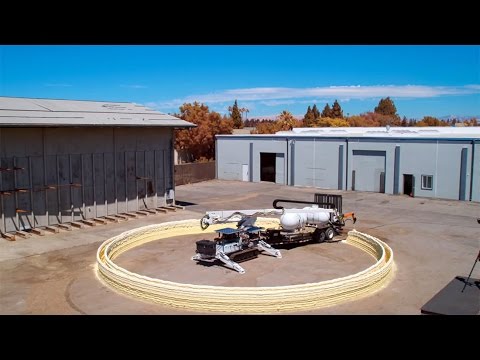 In little more than half a day, an innovative 3-D printing machine built an igloo-shaped building half the size of the US Capitol dome. It did so all by itself with minimal human oversight, not too different from how you’d hit ‘print’ in your living room to create objects with a hobbyist 3-D printer. This remarkable demonstration of force could be truly transformational  — and not just because it could revolutionize how we erect constructions here on Earth but on other planets as well. It’s likely that any extraterrestrial manned colony will use a similar method to build a base.

The machine is just fresh out of the Massachusetts Institute of Technology’s (MIT’s) materials science and design focused Mediated Matter lab in Cambridge. It consists of a tracked vehicle equipped with a very large industrial robot arm that has another smaller, precision-motion robot arm attached to its end. Sort of like Alien mouths.

The highly flexible and precise arm can then be used to direct any conventional (or unconventional for that matter) nozzle typically used in construction works such as pouring concrete or spraying insulating materials. Called the Digital Construction Platform (DCP), the prototype has a combined reach of 10 meters and also carries solar panels and batteries so it can be deployed anywhere.

Most 3-D printers, be them for printing plastic, metal, glass or even human cells, involves a closed, fixed structure that supports the nozzle. Typically, you can’t print objects bigger than the printer’s enclosure itself — but that’s not the case with MIT’s machine. Because it’s free moving, any object of any size can be printed this way.

To prove their prototype, the MIT researchers built the basic structure of the walls of a 50-foot-diameter, 12-foot-high dome. It took only 14 hours of printing.

Steven Keating, the MIT mechanical engineer who led the project, says 3-D printing buildings is cheaper, faster, and safer than manual construction. For instance, ground pillars could be placed in optimal locations only, the walls could have a varying thickness depending on its orientation, and geometrical intricacy is no longer a problem. A lot of money can also be saved, not only on manual labor but also on materials since the precision machine can effortlessly vary the density of the material being poured or mix different materials as it goes along.

“So to me it’s not merely a printer,” says Neri Oxman, group director and associate professor of media arts and sciences, “but an entirely new way of thinking about making, that facilitates a paradigm shift in the area of digital fabrication, but also for architectural design. … Our system points to a future vision of digital construction that enables new possibilities on our planet and beyond.”

It’s worth mentioning that the DCP is intended to be self-sufficient, aligned with Keating’s vision of designing buildings without parts. For instance, DCP has a scoop that can both prepare the building’s surface and acquire local material such as dirt for the construction itself. Coupled with the solar panels feature, the all-electric machine could be deployed to good effect in developing countries or very remote regions. Perhaps, DCP could shine brightly in the remotest of places — the moon or Mars. DCP could be launched on Mars, then build habitat and research domes all by itself using locally sourced materials.

“In the future, to have something totally autonomous, that you could send to the moon or Mars or Antarctica, and it would just go out and make these buildings for years,” said Keating, who led the development of the system as his doctoral thesis work.

Keating says he’s already getting calls from big people interested to hear more about the project. NASA, Google, and the U.S. military are among those interested. Keep your eyes out for the DCP — this might be the future!

DCP was described in the Science Robotics journal.