Facebook and Twitter went into a meltdown after Melania Trump’s speech. The reason was simple: Melania Trump’s speech had some striking similarities with that of First Lady Michelle Obama from the 2008 Democratic convention speech; and by “striking similarities,” I mean it was pretty much identical. But while everyone was coming up with their own arguments, one man used the supreme power to make this point: the power of math.

In order to prove Melania Trump’s speech was plagiarised from First Lady Michelle Obama, astrophysicist Bob Rutledge from McGill university calculated the probability that Donald Trump’s wife had not plagiarised it. His math (shared on Facebook) worked like this:

First, he considered that there are a limited number of words in the English language

According to LanguageMonitor, there are approximately 1 million words in the English language. That’s a lot, but it’s still a reasonable assumption.

“Let’s forget the fact that having the same thematic thrust between Melania Trump’s passage and Michelle Obama’s passage feels too coincidental,” the Montreal-based professor said.

“Let’s forget the fact that there are lots of synonyms that Melania Trump could have used instead of “word is your bond”, “achievements” and “treat people with…respect”, which would have made her passage deviate from that of the First Lady’s passage.”

Then, he asked how close the two speeches could be

“They could be used in almost any ordering, with additional wording, to say the same things as Melania Trump and Michelle Obama said,” he said.

“But what is the probability that Melania Trump would say them in the exact same ordering as Michelle Obama chose to?”

Basically, it’s not just that they said the same thing. It’s that the order they said it in was also similar – which makes a coincidence even less likely.

The possibility of a coincidence? 1 in 87 billion

“Choose one of the fourteen phrases, and write it down — that’s 14 possibilities to start the ordering off,” he said.

“But that’s just the first phrases! For the second phrase, choose one of the remaining 13 phrases, and write it down.

Or as Professor Rutledge’s put it, “about the number of stars in the Milky Way Galaxy”.

“So never mind [Trump’s campaign director Paul] Manafort’s claim that there are a limited number of words in the English language,” he wrote.

“For Melania Trump to have gotten all 14 of those phrases, in the same order as Michelle Obama did at the 2008 Democratic National Convention, is a chance of 1 in 87 billion — about 7,000 times less likely than winning [Canada’s] Lotto 6/49. 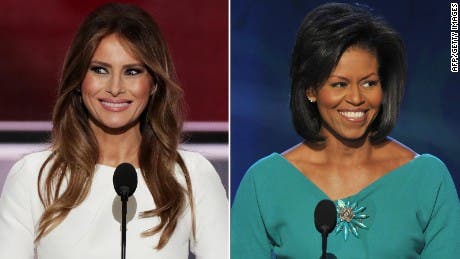