This futuristic bike can reach 144 km/h

It broke the record for man-powered vehicle, and it's not stopping here.

by Mihai Andrei
in Design, News
A A

It broke the record for man-powered vehicle, and it’s not stopping here.

“This was another massive leap in an event that had been fighting for 0.16 km/h (0.1 mph) gains over the last decade,” wrote the Aerovelo team on its company blog. “Breaking into this new range of speeds, Eta has truly earned its name and its title as the world’s most efficient vehicle.”

Some people pedal fast, some like to stroll, and then there’s the Aerovelo Eta bike — which just set a new speed record of 144.17 km/h (89.59 mph). Thanks to its unique design, it might be able to go even faster than that.

By this point, you might have realized that this looks nothing like a regular bike. Aerovelo Eta is fitted with an aerodynamic carbon fiber shell, lightweight frame, and specialized recumbent layout, where the rider sits at the back. The Eta also ditched cockpits and windows so the rider instead relies on a video display to see what’s happening around the bike.

Another innovation is the wheel positioning – just 4 mm (0.15 inches) away from the shell, going through over 1,200 revolutions-per-minute at top speed. The whole thing weighs just 25 kg (55 pounds) without a rider.

The new record adds 4.8 km/h (3 mph) to the previous best and was set as part of this year’s World Human-Powered Speed Challenge, held in the Nevada desert. Of course, a fit rider is also key to the record, but minimizing friction and wind resistance are just as crucial. Not everything went smoothly, and it’s worth following their story – a part of which is described in the video below. 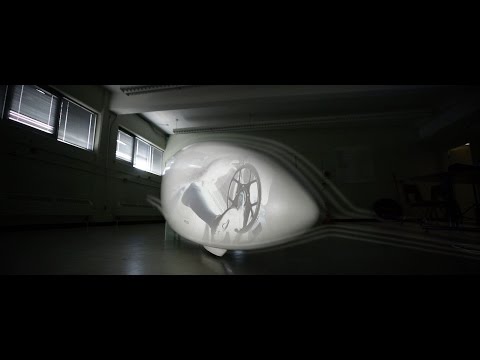 “Looking back at the year, there are two lessons that were further hammered into our team’s psyche. First, no matter how much we think we know, the harsh reality of the real world will always keep us humble,” writes the Aerovelo team.

“Second, is the importance of being absolutely prepared, consistent and mentally focussed for every single run. In the end there’s not much we can do about bugs and weather, except how we prepare and how we react.”

The company was founded by Todd Reichert and Cameron Robertson in 2010. Eta is their fourth bike, designed specifically to break the record.