For the first time since the 07-08 financial crisis, the economy in all EU countries is growing. Even Greece!

But its citizens need to feel this growth in their monthly statement otherwise a disaster might happen.

The European Union is going through its toughest break since its inception. Populist propaganda is sweeping the union threatening it with disintegration, the effects of which can be clearly seen in places like Hungary, Poland and, most notably, the UK, which voted to leave the EU by referendum. Immigrants, lack of jobs, and a poor financial situation were some of the ammunition used by conservative and right-wing groups seeking to discredit the EU Commission as a trove of worthless bureaucrats so they can gain power — preferably without the EU having a pesky hand in the affairs of the state through occult regulation.

This anti-EU sentiment is gaining steam, most notably in the past year. But the same year of 2016 saw unprecedented economic growth in the union across all member states since the dire 07-08 financial crisis. That’s in every EU country, from Portugal to Romania, and from Sweden to Italy. And yes, even Greece too!

The graph below put together by QZ says it all. 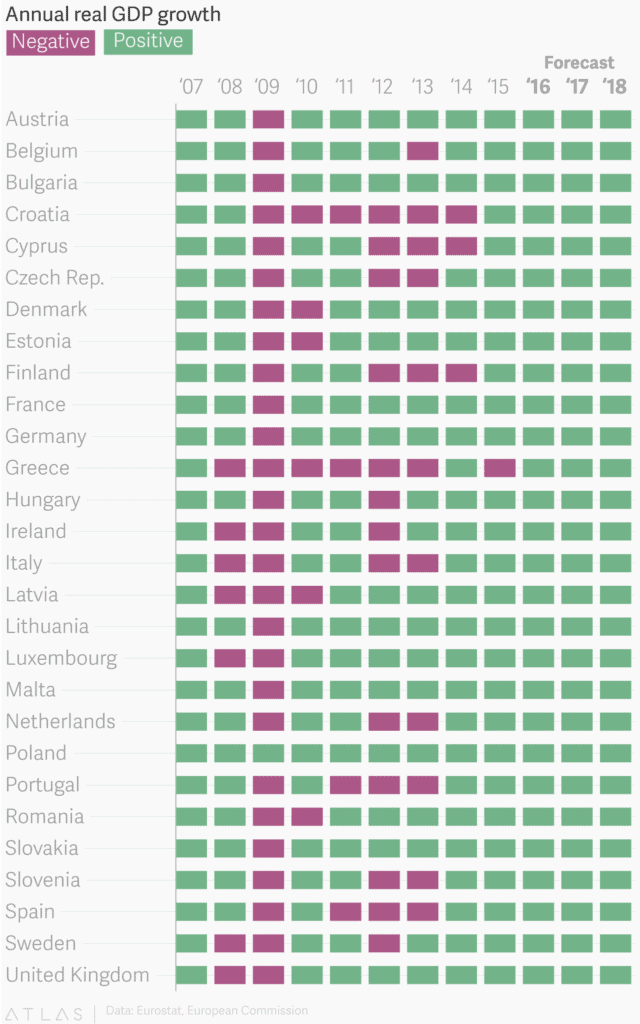 “Real GDP in the euro area has grown for 15 consecutive quarters, employment is growing at a robust pace and unemployment continues to fall, although it remains above pre-crisis levels. Private consumption is still the engine of the recovery. Investment growth continues but remains subdued,” according to the EU Commission’s Winter 2017 Economic Forecast.

This report, however, is marked by higher the usual uncertainty “due to the still-to-be-clarified intentions of the new administration of the United States in key policy areas,”  the imminent elections across many member states and the upcoming “Article 50” negotiations with the UK.

By all means, it seems the EU is doing very well nowadays. The challenge now is to make sure this wealth is distributed more evenly across EU states and all segments of society. If people can’t feel the economic growth, this will do nothing but amplify the populist rhetoric.

ADVERTISEMENT
Tags: european union
IN THESE TRYING TIMES
Accurate scientific information is more important than ever. We're here to help make sense of it all:
coronavirus and beyond.