D-Wave upgrades quantum chip to 2,000 qubits, gets first customer for its $15 million machine

No everyone is convinced this machine can actually perform quantum operations, though.

D-Wave, a company at the forefront of quantum computing, announced last year it had doubled the number of qubits on its flagship chip — the D-Wave 2000Q, which boasts 2,048 qubits. Now, the $15 million machine that is supposed to solve real life problems beyond the reach of classical 1s and 0s computers, has its first customer, signaling market confidence. Some scientists, however, aren’t convinced that the method used by D-Wave can actually solve problems faster than conventional computing architectures.

Transistors perform logic operations by shuttling bits of data, each assigned a value which is either “0” or “1”. That’s how a classical, digital computer works. Quantum computers, however, use qubits or a quantum bit which can simultaneously exist in both states at once – both “0” and “1”. This is known as a superposition, and if scientists can leverage it then computations could be processed in parallel. Two qubits can perform operations on four values, three on eight values and so on in powers of two. Today’s computers have millions of transistors. Now imagine a quantum logic gate that works with millions of qubits.

D-Wave launched the ‘world’s first commercially available quantum computer’, a 128-qubit chipset, in 2011. Since then, its machines have been installed in places like NASA and Google for research in various fields, most predominantly having to do with machine learning.

“The combined power of the TDS / D-Wave quantum cyber solution will revolutionize secure communications, protect against insider threats, and assist in the identification of cyber adversaries and attack patterns,” said James Burrell, TDS Chief Technology Officer and former FBI Deputy Assistant Director, in a statement for the press. “Combining the unique computational capabilities of a quantum computer with the most advanced cyber security technologies will deliver the highest level of security, focused on both prevention and attribution of cyber attacks.”

Burrel says the new technology will help TDS secure its clients’ data better. He seemed excited about the possibilities of using quantum cryptography algorithms. “The intent is to introduce an entirely new approach to existing and emerging cyber security challenges impacted by the volume, sophistication, and complexity of modern attack methodologies,” Burrel added.

To solve problems, D-Wave chips are based on quantum annealing. This architecture approaches problems differently by rendering them like a topographic map with valley and peaks where each coordinate represents a possible solution and its elevation represents its energy. The optimal answer is the lowest point on the map, mimicking the natural tendency of real-world quantum systems to find low-energy states. A classical computer that only uses 1s and 0s would have to first traverse the whole map to find the right answer to a problem but a quantum annealing machine should find the answer much faster.

“Computation is performed by initializing the quantum processing unit (QPU) into a ground state of a known problem and annealing the system toward the problem to be solved such that it remains in a low energy state throughout the process. At the end of the computation, each qubit ends up as either a 0 or 1. This final state is the optimal or near-optimal solution to the problem to be solved,” D-Wave describes. 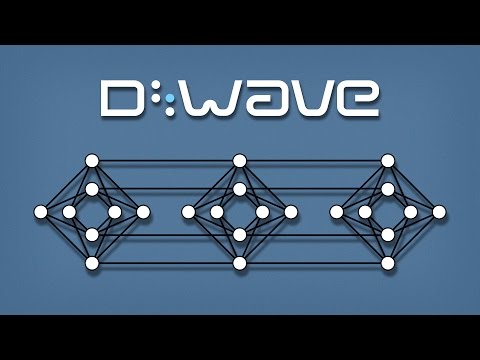 The new D-Wave computer also presents other improvements beyond qubit size. One important upgrade deals with how qubits are tied together. The image below illustrates how qubits joined together in the previous architecture.

Here’s how qubits are tied in the new  D-Wave 2000Q architecture. There are significantly more criss-cross connections which ought to lead to faster problem-solving.

Some scientists, however, aren’t convinced that quantum annealing adds anything to performance. A 2014 review published in the journal Science found tasks run on a D-Wave computer were not faster than those performed by a conventional computer. That $15 million investment doesn’t seem so well placed if this is actually the case. And as for the qubits, more than 2,000 by now, Greg Kuperberg of UC Davis says that these are of low quality. A working two-qubit silicon computer was only demonstrated in 2015, a time when D-Wave was already advertising chips with over 1,000 qubits.

“Just because [their chips] are quantum, that doesn’t make them a quantum computer,” says Kuperberg. “That’s like saying that any invention that is influenced by air must be an airplane. Of course, it’s not true; it might instead be bagpipes.”

It’s not clear right now whether the D-Wave results and promos are skewed or if the machine actually works as intended.