Blue Origin passes key emergency espace test for its capsule with flying colours, then soft lands its rocket too

A huge milestone was reached by Jeff Bezos' space venture.

Jeff Bezos’ Blue Origin is currently on a stellar track record. The crown jewel is yesterday’s new crew capsule emergency escape system which successfully detached itself from Blue Origin’s New Shepard rocket. Not only did the capsule safely touch down but the rocket itself did so too, demonstrating for the fifth time that it’s capable of soft landing.

Reusable rockets are the new norm

The goal of this trial which fired from a port in West Texas was to safely eject the crew capsule. The rocket itself was expendable and the escape mechanism messes with New Shepard’s aerodynamics, so although they proceeded to try and land the rocket as well, Blue Origin engineers didn’t set their hopes too high. It was a welcomed bonus that they made it home with both capsule and rocket intact.

The escape system uses an additional booster mounted on the capsule which is ready to fire whenever safety systems detect the risk of something going horribly wrong. The Mercury, Apollo, and Soyuz rockets which have been extensively used for decades also have escape systems, but Blue Origin’s capsule works significantly different.

“The New Shepard escape motor pushes rather than pulls and is mounted underneath the capsule rather than on a tower. There is no jettison operation. On a nominal mission, the escape motor is not expended and can be flown again and again. We’ve already tested our pusher escape system, including many ground tests and a successful pad escape test, but this upcoming flight will be our toughest test yet. We’ll intentionally trigger an escape in flight and at the most stressing condition: maximum dynamic pressure through transonic velocities,” wrote Blue Origin founder Jeff Bezos in a blog post before the trial commenced.

This was the fifth flight for the NS2 rocket, and it’s last one too, although it could be fired again maybe. Both NS2 and the capsule itself will be retired and there’s a plan to put them in a museum.

While New Shepard is only capable of suborbital flights, Blue Origin announced in September that will soon build a new massive rocket called New Glenn capable of delivering both people and large cargo into space, or right down SpaceX’s alley. Private space flight is evolving very fast and all of us space enthusiasts can only rejoice. Common, guys, make it happen! 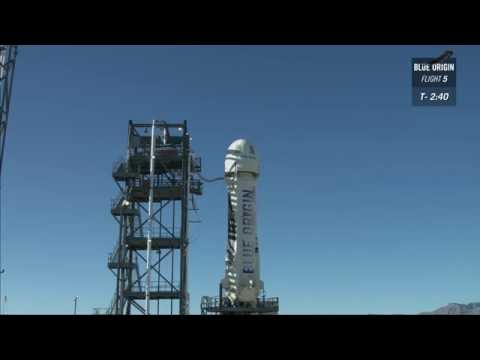