Scientists levitate largest object yet with an acoustic tractor beam, might one day work for humans

From science fiction to reality.

by Tibi Puiu
in News, Physics
Reading Time: 3 mins read
A A

Tractor beams, not too long ago a staple of science fiction, have made the jump into reality. Previously, scientists used acoustic waves to make objects magically levitate — but only if these were very small. Now, a new breakthrough reported by British researchers opens the door for levitating much bigger objects, perhaps even humans one day.

There are a couple of ways to trap objects mid-air, essentially making them levitate. Maglev trains, for instance, literally float on train tracks thanks to powerful electromagnets. There also optic methods (lasers) and even thermal levitation that exploits a temperature difference to lift particles. However, scientists have found that using acoustic waves is more appealing since you can grab non-metals, be they liquid or solid — and the result can be quite breathtaking.

The way acoustic levitation works is by blasting ultrasound waves from a transducer, which bounce off a reflector. The interaction between the bounced-off compressions creates a standing wave which shifts back and forth or vibrates in segments rather than traveling from place to place. Essentially, the standing wave cancels gravity and the object between the transducer and reflector appears to float.

The problem with acoustic levitation is that previous research had always found that the size of the object was limited to the size of the wavelength of sound used. But now University of Bristol researchers may have a way to overcome this limitation.

“Acoustic researchers had been frustrated by the size limit for years, so it’s satisfying to find a way to overcome it. I think it opens the door to many new applications,” Asier Marzo from Bristol’s Department of Mechanical Engineering, said in a statement.

Previously, when scientists tried to acoustically levitate larger objects, these became unstable and spun uncontrollably, instead of floating, until they ultimately were ejected like debris in a tornado. By lowering the frequency of the acoustic wave to audible ranges (below 20kHz), it’s possible to levitate larger objects since the wavelength increases. However, this can also become dangerous for humans whose ears would now be exposed to the lower pitches.

Writing in the Physical Review Letters, the researchers showed how rapidly fluctuating acoustic vortices – or ‘tornados of sound’ – can be controlled by changing the twisting direction of the vortices, thus stabilizing the tractor beam. Using this approach, the team fired ultrasonic waves at a pitch of 40kHz, allowing the tractor beam to suspend a 2cm polystyrene sphere in mid-air. That might not sound like a lot, but this is now the largest object ever levitated. 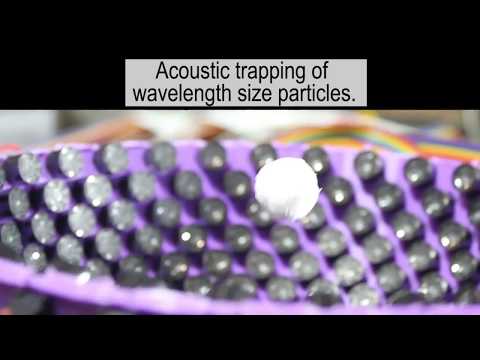 Besides being incredibly cool, applications include touchless control of drug capsules or micro-surgical implements inside the human body. Touchless control is particularly exciting since it means that now fragile objects can be assembled without touching them. What’s more, the researchers say they can use this method to levitate even larger objects, perhaps even humans.

“In the future, with more acoustic power it will be possible to hold even larger objects,” said senior research associate Mihai Caleap.