Binary arithmetic, the basis of all virtually digital computation today, is usually said to have been invented at the start of the eighteenth century by the German mathematician Gottfried Leibniz. But a new study shows that the system might have actually been invented way before that, in the 1400s, by people of the tiny Pacific island of Mangareva in French Polynesia.

The device you are using to read this relies on binary numbers – no matter what it is (unless you printed it or something). Pure binary arithmetic was invented because some calculations are easy to do it than in base 10 (which possibly emerged because people have 10 fingers). But the discovery, in such an isolated place and population, seems to suggest that some of the advantages of the binary system adduced by Leibniz might create a cognitive motivation for this system to arise spontaneously – even in a society with virtually no technology. 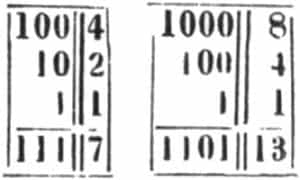 With base 2, numbers are enumerated as powers of 2: instead of units, tens, hundreds and thousands (which are 10 to the power of 0, 1, 2 and 3), you have the digits of a binary number refer to 1, 2, 4, and so on (2 to the power of 0, 1, 2, 3, etc). Every number in the base of 10 has its correspondent in the base of 2 (and in any base, for that matter). Leibniz pointed out in 1703 that to do simple arithmetic in binary, such as addition and multiplication can be done very simply, following easy rules. The downside of binary is that as you go up to higher and higher numbers, you’re going to end up with more and more digits, which are just tedious to write.

Mangareva is a volcanic island that probably had a population of several thousands, and had only rare, occasional encounters with Europeans. It had a highly stratified society which ate mostly seafood and roots. Their society was built in such a way that almost everybody payed some kind of tribute to someone. The regular folk payed some chieftain, he payed a bigger chieftain, and so on. In order to be successful with their very common transactions, they had to develop an easier system to quantify the trade and the tributes.

Andrea Bender and Sieghard Beller of the University of Bergen in Norway, the authors of the latest study found that the former Mangarevans combined base-10 representation with a binary system. They had number words for 1 to 10, and then for 10 multiplied by several powers of 2. Their word takau (which Bender and Beller denote as (K) means 10; paua (P) means 20; tataua (T) is 40; and varu (V) stands for 80. In this notation, for example, 70 is TPK and 57 is TK7. While they note that this is not a true binary, it retains pretty much all the advantages, most notably, it becomes easier to do calculations: 2 × K = P and 2 × P = T.

“It’s puzzling that anybody would come up with such a solution, especially on a tiny island with a small population,” Bender and Beller say. But they add: “This very fact also demonstrates just how important culture is for the development of numerical cognition — for example, how in this case dealing with big numbers can motivate inventive solutions.”