by Mihai Andrei
in Mathematics, Offbeat
Reading Time: 1 min read
A A
Share on FacebookShare on TwitterSubmit to Reddit

In case you don’t know, Futurama is a popular science fiction – I highly recommend it, as a matter of fact, but that’s more of a personal preference. What’s interesting about it is that a mathematical theory was created especially for it, or for an episode to be more exact. 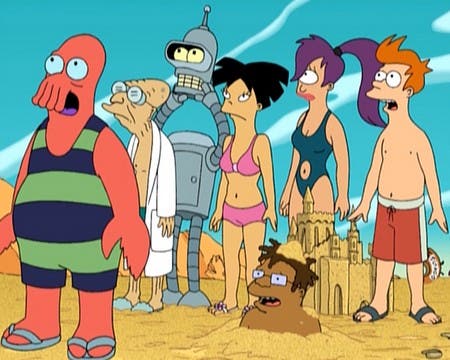 The theory refers to a hypothetical scenario where two persons have used a machine to swap their minds, but cannot directly change them back due to an immune response. The theory from the mathematical field of study called group theory says that no matter how many people have swapped minds with one another, they can still get back to the original configuration with two additional individuals who haven’t swapped minds with anyone. The theory was proven by the show’s writer Ken Keeler, who also has a PhD in mathematics.

For the ones of you who like math, I think you should try and demonstrate it for yourself, it’s quite interesting. For those interested about this, but really that savvy, there’s also a demonstration on Wikipedia. Either way, who says cartoons aren’t smart ?