Scientists have demonstrated the fastest water heater in the world, a powerful X-ray laser capable of raising water’s temperature from room temperature to a staggering 100,000 degrees Celsius faster than you can blink.

The ungodly temperature — almost 20 times hotter than the surface of the sun — was reached in only a tenth of a picosecond or a millionth of a millionth of a second. In the process, the water molecules are forced to behave radically different than they normally would at room temperature, entering an exotic state of matter that’s highly uncommon for water to be in.

However, the way the water’s temperature rose in the current study is fundamentally different. Carl Caleman at the Center for Free-Electron Laser Science (CFEL), along with colleagues at Uppsala University, Sweden, worked with the X-ray free-electron laser Linac Coherent Light Source (LCLS) at the SLAC National Accelerator Laboratory in California. When the energetic X-rays hit the water, they punch right through the molecules, stripping electrons away, thereby offsetting the balance of electric charges. This creates a violent tendency in the atoms, forcing them to move due to the strong repulsive force. Incredibly quickly, the water undergoes a phase transition from liquid to plasma, which is a state of matter where the electrons have been removed from the atoms, becoming an electrically charged gas.

“But while the water transforms from liquid to plasma, it still remains at the density of liquid water, as the atoms didn’t have time to move significantly yet,” said co-author Olof Jönsson from Uppsala University. This exotic state of matter is nothing that can be found naturally on Earth. “It has similar characteristics as some plasmas in the sun and the gas giant Jupiter, but has a lower density. Meanwhile, it is hotter than Earth’s core.” 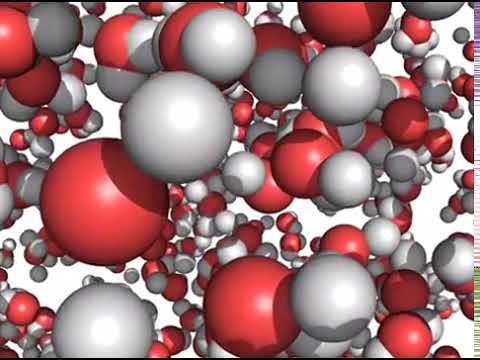 Simulation of the movement of the water molecules and atoms in the first 70 femtoseconds of the intense X-ray pulse. The experimental data were used to validate the theoretical modeling of the dynamics. Credit: Carl Caleman, CFEL/DESY and Uppsala University.

There’s more to this study than simply blasting liquid water into plasma (which is awesome in and of itself). The stimulation and measurements obtained during the experiment allow scientists to learn more about the general properties of water, which is odder than meets the eye. Among its many quirky properties, water is less dense as a solid than as a liquid and expands dramatically as a gas.

“The study gives us a better understanding of what we do to different samples,” explained co-author Nicusor Timneanu from Uppsala University, one of the key scientist developing the theoretical model used. “Its observations are also important to consider for the development of techniques to image single molecules or other tiny particles with X-ray lasers.”