by Alexandru Micu
in Anthropology, Biology, Books, History, Reviews, Science
Reading Time: 7 mins read
A A
Share on FacebookShare on TwitterSubmit to Reddit 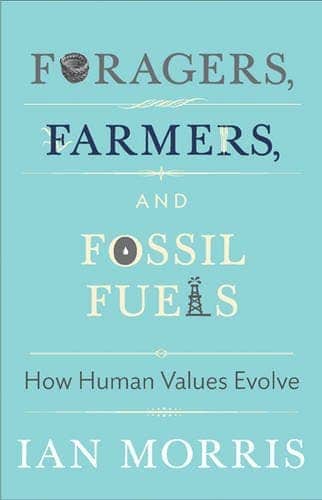 What we consider as ‘right’ or ‘just’ isn’t set in stone — far from it. In Foragers, Farmers, and Fossil Fuels, Stanford University’s Willard Professor of Classics Ian Morris weaves together several strands of science, most notably history, anthropology, archeology, and biology, to show how our values change to meet a single overriding human need: energy.

Do you think your boss should be considered better than you in the eyes of the law? Is it ok to stab someone over an insult? Or for your country’s military to shell some other country back to the stone age just because they’re ‘the enemy’? Do leaders get their mandate from the people, from god, or is power something to be taken by force? Is it ok to own people? Should women tend to home and family only, or can they pick their own way in life?

They’ll be different because a lot of disparate factors weigh in on how we think about these issues. For simplicity’s sake, we’ll bundle all of them up under the umbrella-term of ‘culture’, taken to mean “the ideas, customs, and social behavior of a particular people or society.” I know what you’ll answer in broad lines because I can take a look at Google Analytics and see that most of you come from developed, industrialized countries which (for the most part) are quite secular and have solid education systems. That makes most of you quite WEIRD — western, educated, industrialized, rich, and democratic.

As we’re all so very weird, our cultures tend to differ a bit on the surface (we speak different languages and each have our own national dessert, for example). The really deep stuff, however — the frameworks on which our cultures revolve —  these tend to align pretty well (we see equality as good, violence as being bad, to name a few). In other words, we’re a bit different but we all share a core of identical values. Kind of like Christmass time, when everybody has very similar trees but decorates them differently, WEIRD cultures are variations on the same pattern.

It’s not the only pattern out there by any means, but it’s one of the (surprisingly) few that seem to work. Drawing on his own experience of culture shock working as an anthropologist and archaeologist in non-WEIRD countries, Professor Morris mixes in a bird’s eye view of history with biology and helpings from other fields of science to show how the dominant source of energy a society draws on forces them to clump into one of three cultural patterns — hunter-gatherers, farmers (which he names Agraria), and fossil-fuel users (Industria).

In broad lines, Morris looks at culture as a society’s way to adapt to sources of energy capture. The better adapted they become, the bigger the slice of available energy they can extract, and the better equipped they will be to displace other cultures — be them on the same developmental level or not. This process can have ramifications in seemingly unrelated ways we go about our lives.

To get an idea of how Morris attacks the issue, let’s take a very narrow look at Chapter 2, where he talks about prehistoric and current hunter-gatherer cultural patterns. Morris shows how they “share a striking set of egalitarian values,” and overall “take an extremely negative view of political and economic hierarchy, but accept fairly mild forms of gender hierarchy and recognize that there is a time and place for violence.”

This cultural pattern stems from a society which extracts energy from its surroundings without exercising any “deliberate alterations of the gene pool of harvested resources.” Since everything was harvested from the wild and there was no way to store it, there was a general expectation to share food with the group. Certain manufactured goods did have an owner, but because people had to move around to survive, accumulating wealth beyond trinkets or tools to pass on was basically impossible, and organized government was impractical. Finally, gender roles only went as far as biological constraints — men were better tailored to hunt, so they were the ones that hunted, for example. But the work of a male hunter or a female gatherer were equally important to assuring a family’s or group’s caloric needs were met — as such, society had equal expectations and provided almost the same level of freedom and the same rights for everyone, regardless of sex. There was one area, however, where foragers weren’t so egalitarian:

“Abused wives regularly walk away from their husbands without much fuss or criticism [in foraging societies],” Morris writes, something which would be unthinkable in the coming Agraria.

“Forager equalitarianism partially breaks down, though, when it comes to gender hierarchy. Social scientists continue to argue why men normally hold the upper hand in foarger societies. After all, […] biology seems to have dealt women better cards. Sperm are abundant […] and therefore cheap, while eggs are scarce […] and therefore expensive. Women ought to be able to demand all kinds of services from men in return for access to their eggs,” Morris explains in another paragraph. “To some extent, this does happen,” he adds, noting that male foragers participate “substantially more in childrearing than […] our closest genetic neighbours.”

But political or economic authority is something they can almost never demand from the males. This, Morris writes, is because “semen is not the only thing male foragers are selling.”

This is only a sliver of a chapter. You can expect to see this sort of in-depth commentary of how energy capture dictates the shape of societies across the span of time throughout the 400-page book. I don’t want to spoil the rest of it, since it really is an enjoyable read so I’ll give you the immensely-summed-up version:

These sets of values ‘stuck’ because they maximised societies’ ability to harvest energy at each developmental level. Societies which could draw on more energy could impose themselves on others (through technology, culture, economy, warfare), eventually displacing them or making these other societies adopt the same values in an effort to compete.

Should I read it?

Definitely. Morris’ is a very Darwinian take on culture, and he links this underlying principle with cultural forms in a very pleasant style that hits the delicate balance of staying comprehensive without being boring, accessible without feeling dumbed down.

The theory is not without its shortcomings, and the book even has four chapters devoted to very smart people (University of Exter professor emeritus of classics and ancient history Richard Seaford, former Sterling Professor of History at Yale University Jonathan D. Spence, Harvard University Professor of Philosophy Christine Korsgaard, and The Handmaiden’s Tale’s own Margaret Atwood) slicing the theory and bashing it about for all its flaws. Which I very much do appreciate, as in Morris’ own words, debates “raise all kinds of questions that I would not have thought of by myself.” Questions which the author does not leave unanswered.

All in all, it’s a book I couldn’t more warmly recommend. I’ve been putting off this review for weeks now, simply because I liked it so much, I wanted to make sure I do it some tiny bit of justice. It’s the product of a lifetime’s personal experience, mixed with a vast body of research, then distilled through the hand of a gifted wordsmith. It’s a book that will help you understand how values — and with them, the world we know today — came to be, and how they evolved through time. It’ll give you a new pair of (not always rose-tinted) glasses through which to view human cultures, whether you’re in your home neighborhood or vacationing halfway across the world.

But most of all, Foragers, Farmers, and Fossil Fuels will show you that apart from a few biologically “hardwired” ones it’s the daily churn of society, not some ultimate authority or moral compass, that dictates our values — that’s a very liberating realization. It means we’re free to decide for ourselves which are important, which are not, and what we should strive for to change our society for the better. Especially now that new sources of energy are knocking at our door.