It's an apocalyptic scenario on steroids -- and yet some humans not only survived it but thrived in the process.

by Mihai Andrei
in Archaeology, Geology, News, Science
Reading Time: 6 mins read
A A
Share on FacebookShare on TwitterSubmit to Reddit

Imagine a year without summer. The sky turns gray during the day and glows a sinister red at night. Trees wither and start to fall, all vegetation dries down and becomes a desolate shadow of its former self. Animals also start to suffer and thin down, and the damage propagates up the food chain, wiping out entire ecosystems. The same cycle repeats year after year, with no visible end in sight.

Sounds like an apocalyptic scenario, doesn’t it? Well, that’s exactly what the world, and us too, as part of it, went through some 74,000 years ago during a supervolcano eruption. And some of us actually thrived.

Volcanic eruptions are scary enough as it is, but supervolcanoes are an entirely different beast. A supervolcano eruption brings deposits of at least 1,000 cubic kilometers (240 cubic miles), affecting the entire planet’s climate and chemical make-up. There are about 20 known supervolcanoes on the planet, and geologists have managed to discover just 12 eruptions from supervolcanoes, the oldest known one dating from about 25 million years ago.

Toba, in Indonesia, was one of these eruptions.

The eruption was large enough to have deposited an ash layer approximately 15 cm (6 in) thick over all of South Asia and ejected some 10,000 million tonnes of sulfurous acid, as well as 6,000 million tonnes of sulfur dioxide into the atmosphere. It was a catastrophic eruption, of biblical proportions, but the worst happened after the eruption: the aerosols ejected by the volcano dropped global temperatures 3.0 to 3.5 °C (5 to 6 °F) for several years.

To give you a sense of scale, in 1815, Mount Tambora’s eruption (also in Indonesia) brought crop failures, famine, and mass migrations when it reduced mean temperatures by 0.53 °C (0.95 °F). The eruption column reached the stratosphere at an altitude of more than 43 kilometers (141,000 ft), creating an aerosol veil that blocked part of incoming sunlight energy. This is called a volcanic winter.

Long-term cooling effects are primarily dependent upon injection of sulfur gasses into the stratosphere. The Toba eruption dwarfs Mount Tambora, with the effects being much more devastating. 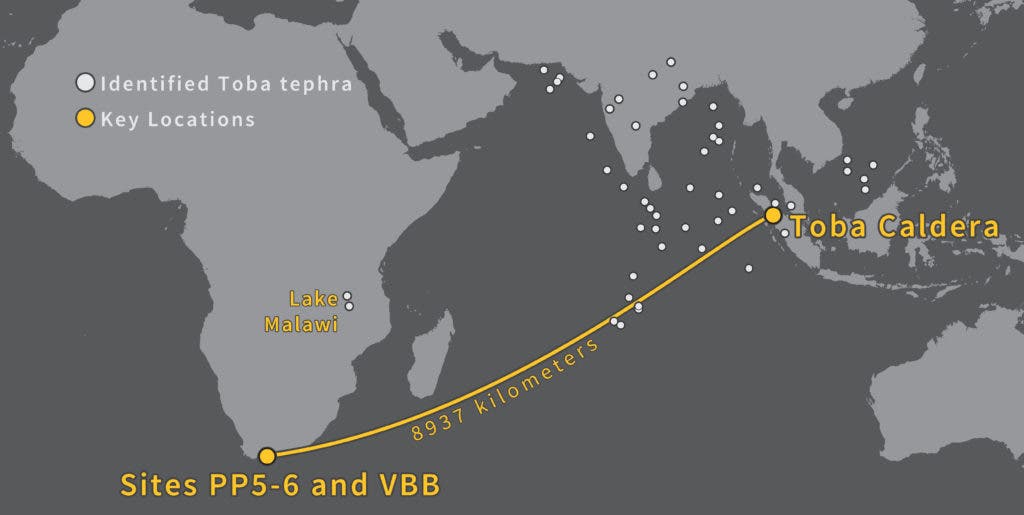 No species were spared from the effects, and there is evidence of a population bottleneck (a sharp reduction in the size of a population) in central east Africa and India, which affects the genetic make-up of the human worldwide population to this day. But some populations might have been better off than others.

Some ecosystems (called refugia) still had the necessary resources to survive. Most notably, populations close to the sea would have likely been able to eat shellfish, which are nutritious and less affected by eruptions.

Researchers have found new evidence relating to this eruption in an unlikely place: archaeological sediment in South Africa.

When the Toba eruption took place, it spewed rock, gas, and tiny microscopic pieces of glass. Under a microscope, they have a very distinctive hook-like shape which can trace them to the eruption. These fragments are so small that when they’re ejected into the atmosphere, they can spread across the entire world. Such a fragment was chanced upon by Panagiotis (Takis) Karkanas, who found it in some sediment encased in resin.

“It was one shard particle out of millions of other mineral particles that I was investigating. But it was there, and it couldn’t be anything else,” says Karkanas.

He and his colleagues had considered the possibility of finding such a volcanic shard, but it wasn’t easy to identify one.

“Takis and I had discussed the potential of finding the Toba shards in the sediments of our archaeological site, and with his eagle eye, he found one,” explains Curtis W. Marean, project director of the Pinnacle Point excavations where the shard was found.

They sent it to Eugene Smith, a volcanologist with the University of Nevada at Las Vegas. For Smith, it was a long trip down memory lane.

“The Pinnacle Point study brought me back to the study of glass shards from my master’s thesis 40 years earlier,” says Smith.

It was kind of like looking for a needle in an archaeological haystack, Smith told ZME Science in an email.

“The shards are small (less than 100 microns in size) and very rare (one shard per about 10,000 grains), but through careful processing in our lab at the University of Nevada, Las Vegas (UNLV) we were able to identify multiple shards from both Pinnacle Point and Vleesbaai. For Pinnacle Point, we have three chemical analyses for three shards (but we found about 40 more). For Vleesbaai, we now have 12 analyses for 12 different shards.”

Finding such a shard obviously involves a lot of chance, but through thoughtful and careful preparations, researchers can improve their chances, Smith says.

“Although the shards are very rare, we increase the odds of finding them by doing careful processing in the UNLV lab. Samples are first cleaned to remove organic and carbonate material. They then go through several heavy liquid steps to remove both heavier and lighter material leaving grains with a specific gravity in the proper range to find shards. These grains are mounted on an epoxy round and polished. We then look at each grain on the round using a petrographic microsope.”

It’s a tedious, but rewarding process.

“The rounds contain a lot of mineral grains but they can be identified using their optical properties. Shards are glass, so they are optically isotopic and easy to distinguish from mineral grains like quartz or feldspar. After identifying the shards, we analyze them using electron microprobe and laser ablation inductively coupled mass spectrometer. This is a very tedious process that takes quite a bit of care and patience, but finding shards and identifying their source is an amazing experience.”

Together, they were able to confirm the source of the shard. Putting two and two together (the archaeological and the volcanologic evidence), they concluded that humans must have survived the eruption in order to leave the remains behind.

“Many previous studies have tried to test the hypothesis that Toba devastated human populations,” Marean notes. “But they have failed because they have been unable to present definitive evidence linking a human occupation to the exact moment of the event.”

“There is a rich record of human habitation along the south coast of South Africa from about 120,000 years ago to the present. The record from 160,000 to 120,000 is more ephemeral. The evidence includes their discarded stone tools, food remains, and fire places. The groups would be hunter-gatherers living in social groups of about 20-30 people, and perhaps organized into larger ethnolinguistic groups, but we are not sure about the latter.”

Researchers say the archaeological evidence indicates not only that the human populations managed to survive, but that they were able to go about their lives relatively undisturbed — which was a rare privilege, given the scale of the volcanic eruption.

“These models tell us a lot about how people lived at the site and how their activities changed through time,” say Erich Fisher, associate research scientist with the Institute of Human Origins, who built the detailed photorealistic 3D models from the data. “What we found was that during and after the time of the Toba eruption people lived at the site continuously, and there was no evidence that it impacted their daily lives.”

It’s quite possible that their proximity to the rich coast ensured a stable diet and allowed them to thrive, as other populations were partially or completely wiped out.

“We speculated in the paper that the rick coastal foods, such as shellfish, may have provided a more resilient food base than terrestrial foods and this might have allowed people to make it through better than interior groups,” Marean concluded for ZME Science.

“Of course being very near the volcano one would see a very strong temporary effect on weather. But there would have been worldwide climate impacts, but these would also vary regionally.”