Watch a killer whale pass right underneath this paddleboarder

When Luke Reilly took his paddleboard out, he certainly wasn’t expecting this. The killer whale, one of the most intelligent predators in the world, passed right beneath him, apparently playing and showing off. The once-in-a-lifetime footage was captured – where else? – in New Zealand, just off the Kuaotunu beach. His reaction at the end of the video says it all: 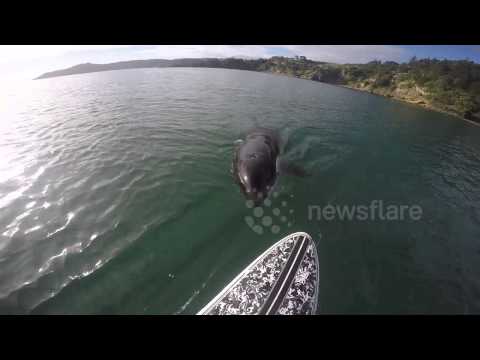 Killer whales (also referred to as orcas) are found in all oceans, from the frigid Arctic and Antarctic regions to tropical seas. They have an extremely diversified diet, with some individuals feeding only on fish, while others prefer mammals. They have highly sophisticated techniques and exhibit cultural behavior, passing on their techniques from generation to generation; they are also often curious and playful. Wild orcas are generally not considered a threat to humans… but it’s hard to keep your cool when one swims right beneath you.