Tiny, new-generation robot can walk on land, water, or swim — while being downright adorable

This cutesy bot hides a lot of potential.

by Alexandru Micu
in News, Robotics, Science, Videos
A A

One of the tiniest robots to come out of Harvard’s laboratories shows that being small can be a huge advantage.

Fitfully christened the ‘Harvard Ambulatory Microrobot’ (HAMR), the device does exactly what it says on the tin — it’s from Harvard, it moves, it’s tiny, and it’s a robot. But don’t let its modest appearance deceive you, for HAMR will do a lot of things its beefier brethren can’t.

The robot can walk on land, walk underwater, or walk on water without any time constraints. The team behind HAMR hope their tiny creation will open up new possibilities for bots, paving their way towards new environments.

HAMR really is tiny. It weighs an intimidating 1.65 grams (0.05 oz) — about as much as a paper clip — and can carry an additional 1.44 grams of payload while retaining its ability to float. The bot draws on a new generation of multifunctional foot pads to carry it across watery surfaces. These pads use surface tension induced buoyancy to keep the bot afloat — just like those tiny bugs that zip across water surfaces.

But just floating isn’t very useful — it’s much more useful to float towards something. The team has the bot covered in that regard. They equipped HAMR with four pairs of asymmetric flaps and programmed it with custom-designed swimming gaits to help it paddle the water surface and move around. The robot’s swimming patterns resemble those of a diving beetle, the team adds, allowing it to both advance and turn.

Moving on the surface requires little energy and saves HAMR the hassle of avoiding obstacles. But should the need arise, it can also apply a voltage to its foot-pads. The process, known as electrowetting, reduces the contact angle between a material and the water surface under an applied voltage, the team writes. This change makes it easier for an object to break the water surface and sink.

A coat of Parylene keeps it from shorting under water.

“This robot nicely illustrates some of the challenges and opportunities with small-scale robots,” said senior author Robert Wood.

“Shrinking brings opportunities for increased mobility — such as walking on the surface of water — but also challenges since the forces that we take for granted at larger scales can start to dominate at the size of an insect.”

Once below, HAMR moves around using the same gait it employs on dry land. The bot is just as mobile underwater, but emerging back to try land does pose a few problems. The surface tension of a body of water is relatively immense since the bot is so tiny. When trying to emerge, surface tension applies a force roughly twice the robot’s weight down on HAMR. The team also notes that this process dramatically increases friction on the robot’s hind legs, destabilizing and potentially damaging it.

To overcome this issue, they made HAMR’s diminutive transmission more sturdy and installed soft pads on its front legs to increase payload capacity and redistribute friction on inclined planes. All these changes mean that HAMR can currently break surface tension and emerge from a body of water — provided it can find a ‘modest incline’ to climb out on.

“HAMR’s size is key to its performance,” said co-author Neel Doshi. “If it were much bigger, it would be challenging to support the robot with surface tension and if it were much smaller, the robot might not be able to generate enough force to break it.”

“This research demonstrates that microrobotics can leverage small-scale physics — in this case surface tension — to perform functions and capabilities that are challenging for larger robots,” adds first author Kevin Chen.

While HAMR doesn’t have any real-life applications so far, it’s a great platform to showcase the advantages (and shortcomings) of tiny robots. The team will keep refining their design. Next on their list is improving HARM’s ability to move around and making it return to land even without a ramp — the team is currently coquetting with gecko-inspired pads or some sort of jumping mechanism for the task, although they may settle on a different solution.

But perhaps most importantly, HAMR is cute as a button. Judging from this video Harvard created back in January, if they ever make a pet version of the tiny little robot, I’m getting one. The video showcases an older version of HAMR, which lacks the padded feet and waterproof coating. 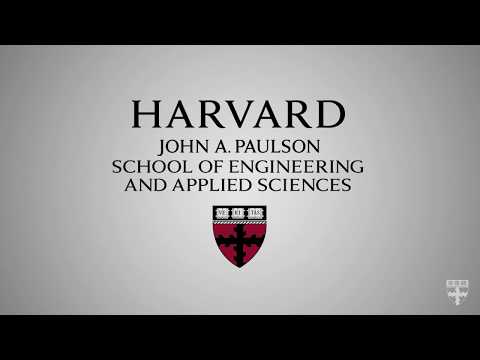 The paper “Controllable water surface to underwater transition through electrowetting in a hybrid terrestrial-aquatic microrobot” has been published in the journal Nature Communication.