Medieval tsunamis in the Alps – could happen again

If you think about tsunamis, you’ll probably think about Japan, Indonesia, maybe America… the last place you’d image would be the Alps, right? Well, you might have to go back to that. 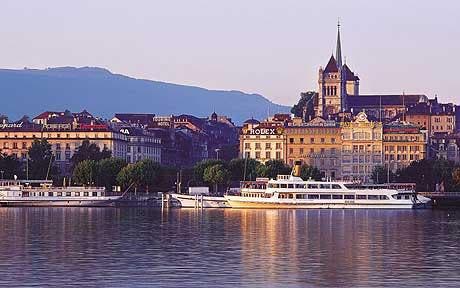 About 1500 years ago, a massive flood took place in Geneva, Switzerland, wiping out everything in its path, crippling the local community. Now, researchers believed they found the culprit in the form of a tsunami, a threat which is still pretty much posed today. The presumed wave was caused by a huge landslide, wrecking the entire medieval city, which was probably already a known trading hub at the time.

Far from the ocean, the massive wave had its origin in the Rhône River, which feeds and flows through Lake Geneva. The Swiss team analyzed a huge sediment deposit at the bottom of the lake and came to the conclusion that it once belonged above the lake and slid into the Rhône near the place it flows into the lake. The sudden splash created a tsunami that flower through the 580-square-kilometer lake towards Geneva, the study suggests; the height would have been between 3 and 8 meters, quite enough for that period.

But perhaps more important, researchers warm, is that this danger isn’t a thing of the past. A similar event happening today would cause much greater damage, significantly affecting not only Geneva, but also the neighboring cities of Lausanne, Nyon, and Thonon-les-Bains, threatening over 300.000 people who live in the area. The damage could be amplified by the fact that towards Geneva, the lake narrows, creating a funnel effect which acts as an amplified for waves. Still, there’s no need to panic, because there isn’t any hint of an immediate threat. Still, it is something to consider.

“If this has happened five to six times since the last glaciation, there’s reason to believe it could happen again in the future,” said University of Geneva geologist Guy Simpson, who study team’s modeler. “A three-meter [ten-foot] wave that hit Geneva today would be a scary wave.”

The research will be published in Nature