Seismologists working at the University of Utah reported an earthquake occurring at 06:34 AM on March 30, 2014 (MDT). The epicenter of the magnitude 4.8 shock was located 4 miles north-northeast of Norris Geyser Basin in Yellowstone National Park, Wyoming. 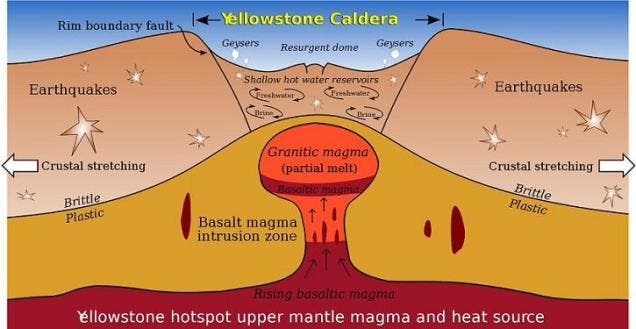 This was not a singular event, but was a part of a series of earthquakes that began in this area on Thursday, March 27 which included over 25 temblors. This was the largest event to take place in Yellowstone since February 22, 1980.

The Yellowstone Caldera is actually a part of a supervolcano, which erupted in massive events 2.1 million, 1.3 million, and 640.000 years ago. Some geologists believe that the supervolcano will erupt again sometime in the next 50.000 years, but based on the style and location of the earthquakes, there’s no reason to expect any other geologic activity aside for continued seismicity – in other words, you shouldn’t panic or worry of a supervolcano eruption – there’s no indication at all that this could happen in the foreseeable future.

If the Yellowstone were in fact moving closer to an eruption, we would get some more severe warnings. Much higher seismic activity, with events probably going up to a magnitude of 6 and even further would be the first warning sign. Then, we’d see changes in hydrothermal features, gas output, ground movement – all at a very high level, which would leave little cause for ambiguity. But what if an eruption would take place?

It’s unclear just how much magma is crystallized in the Yellowstone Caldera, and if it can still erupt with the strength it did 640.000 years ago, but if it did, the results would be devastating. It almost certainly won’t threaten the human race as a species, but for the US, it would be a matter of survival. People from the surrounding states would have to be evacuated almost entirely to be able to survive, and the nation itself would be under extreme pressure. The entire world would probably experience perpetual winter for a few years, as the volcanic ash blocks the sun rays from heating the Earth – it would be unlike anything the human race has ever faced. This is just something to give you a sense of proportion, not something meant  to freak you out. This is a geologic event; it could tens of thousands of years from now, it could never happen again – but it almost certainly not happen in the foreseeable human future.

Anyone who felt the earthquake is encouraged to fill out a survey form on either the Seismograph stations web site: www.quake.utah.edu or the U.S. Geological Survey web site: earthquake.usgs.gov.