A new type of Tyrannosaur with a very long “nose” has been nicknamed “Pinocchio rex” – but this dinosaur was nothing to laugh about. It measured some 9 meters in length, was a ferocious carnivore, and had a long, distinctive snout – which possibly made it even more dangerous.

Interestingly enough, the skeleton was found at a construction site in China, and was identified and reconstructed by scientists at Edinburgh University, UK. The 66 million year old predator officially named Qianzhousaurus sinensis, is described in Nature Communications.

“Pinocchio” looked very different to other tyrannosaurs. It had the familiar toothy grin of T. rex, but its snout was long and slender, with a row of horns on top,” said Edinburgh’s Dr Steve Brusatte. It might have looked a little comical, but it would have been as deadly as any other tyrannosaur, and maybe even a little faster and stealthier. We thought it needed a nickname, and the long snout made us think of Pinocchio’s long nose.”

Researchers believe several different tyrannosaurs competed side by side in what is today China during the Cretaceous period. The enormous Tarbosaurus (up to 13m) was extremely strong, being able to overpower most of the giant herbivores which inhabited the area. Pinocchio Rex was lighted, and probably fed off of smaller creatures, such as lizards and feathered dinosaurs. But at 9 meters and almost a ton – it was still huge.

“The iconic picture of a tyrannosaur is T. Rex, the biggest, baddest dinosaur of all. “But this new species was lighter, less muscular. It breaks the mould. Perhaps it had a faster bite and hunted in a different way.” 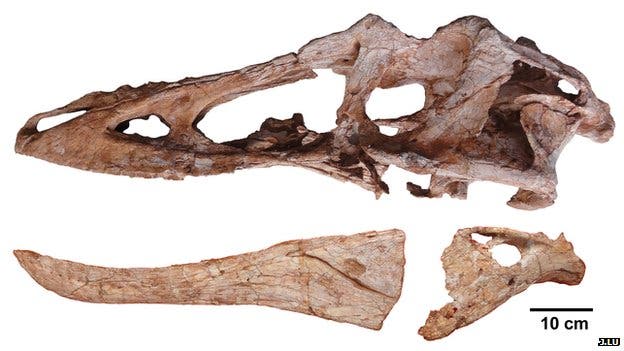 But why did it have such a big, elongated snout – 35 percent longer than any tyrannosaur?

“The truth is we don’t know yet. But it must’ve been doing something different,” Dr Brusatte explained.

In recent years, two juveniles from the same species were dug up, raising the first questions about a new tyrannosaur.

“The trouble was, they were both juveniles. So it was possible their long snouts were just a weird transient feature that grows out in adults,” said Dr Brusatte, an expert in tyrannosaur evolution.

But this one is an almost mature dinosaur, almost 2 times bigger than previously excavated specimens, and confirms hunches about the large snouts – it also seems to suggest that Pinocchio Rex wasn’t an isolated species, and in fact, was quite widespread in what today is Asia.

“Although we are only starting to learn about them, the long-snouted tyrannosaurs were apparently one of the main groups of predatory dinosaurs in Asia,” he said.