A potential explanation on the mysterious ‘Muma’ mounds

The Mima mounds are low, flattened, domelike, natural mounds covered with vegetation, covering the landscape in an apparent pattern; they are most noticeable in the prairies in Washington, but appear in several places in the world. Aside from the fact that they look really interesting, there’s something about them which makes them really special: we don’t know how they were formed.

As always, people were quick to point the “blame” at someone close: in this case, it was gophers. People thought pocket gophers created them, and any resulting pattern is simply coincidence. Researchers in the 1940s found that Mima mounds tend to form in areas with poorly draining soils, so the “Fossorial Rodent Hypothesis” was put forth. However, while there seems to be a connection between the little rodents and the mounds, further study showed that gophers didn’t create them, just “adopted” and maintained them – growing them over the course of hundreds of years, which explains why no one has seen one of them formed.

Another theory is the aeolian origin – some simply believe the mounds are simply dunes or nebkhas formed by the accumulation of wind-blown sediments around clumps of vegetation. There are no special pieces of evidence to support this theory, but is seems just as likely as any. 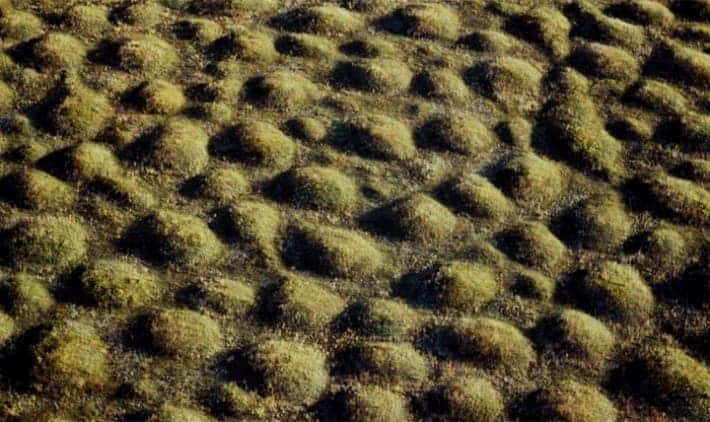 Andrew Berg, a geologist with the U.S. Bureau of Mines in Spokane theoretized that the mounds were actually a result of major seismic activity, which caused “wrinkles” in the soil. He hammered together sheets of plywood coated with volcanic ash and observed that mound-like formations emerged – therefore supporting the idea that seismic activity could form them. But again, there is no direct dication of this happening, it’s just that it could thereotically happen.

The last traditional theory is subsequent clay shrinking and expanding. When clay is exposed to large amounts of water, in some conditions, the clays can swell.Silts, which are the soils in case here, are also related with this geomorphologic feature, and could exhibit similar behavior.

But some think that the actual cause may be different.

“My sense of the literature is that people look at the mounds and think they’re faunally generated by default,” study co-author Michael Cramer, a biologist at the University of Cape Town in South Africa, told us. “Many [scientific] papers are written in such a way that vegetation patterning isn’t mentioned.”

He believes that neither animals, nor earthquakes, winds and clay-like behavior formed the mounds.

“We’re suggesting that people should have a more balanced view and entertain the possibility that vegetation could be behind mound formation,” Cramer added.

More exactly, he believes the mounds are the result of something called vegetational spatial patterning. What this means is that plants and group of plants spread their roots towards the areas with most water and nutrients. The plants don’t directly form the mounds, but they affect waterborne and windborne soil deposition and erosion, which can lead to mound formation, Cramer said.

Since this type of mound is quite wide spread throughout the world, he’s trying to use statistical analysis to make his point.

“I am actually gearing up to now use the statistical techniques by the Germany group to analyze the mounds in South Africa,” Cramer said. “There hasn’t been a rigorous inclusion of how spatial patterning could generate these mounds. We want to try to find evidence for vegetation spatial patterning for the mounds, and differentiate if they are aeolian [windborne] or a consequence of erosion.”

The peer review study hasn’t been published yet, but it will be detailed in the next issue of Palaeogeography, Palaeoclimatology, Palaeoecology.