Marks on Martian Dunes May Be Tracks of Dry-Ice Sleds

by Mihai Andrei
in Geology, Space
Reading Time: 3 mins read
A A
Share on FacebookShare on TwitterSubmit to Reddit

More and more discoveries seem to hint at a watery past for Mars. Now, NASA research shows that hunks of frozen carbon dioxide (dry ice) may glide down some Martian sand dunes on cushions of gas similar to miniature hovercraft, plowing away as they go down. 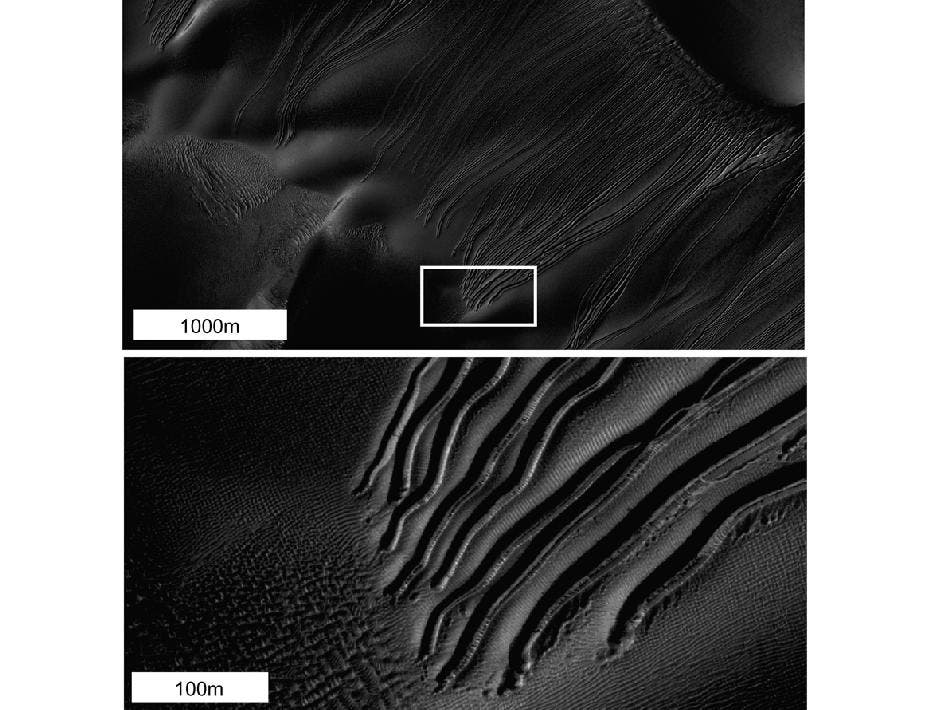 This study could explain one of the mysteries of Martian geology – the enigmatic class of gullies seen on sand dunes.

“I have always dreamed of going to Mars,” said Serina Diniega, a planetary scientist at NASA’s Jet Propulsion Laboratory in Pasadena, Calif., and lead author of a report published online by the journal Icarus. “Now I dream of snowboarding down a Martian sand dune on a block of dry ice.” 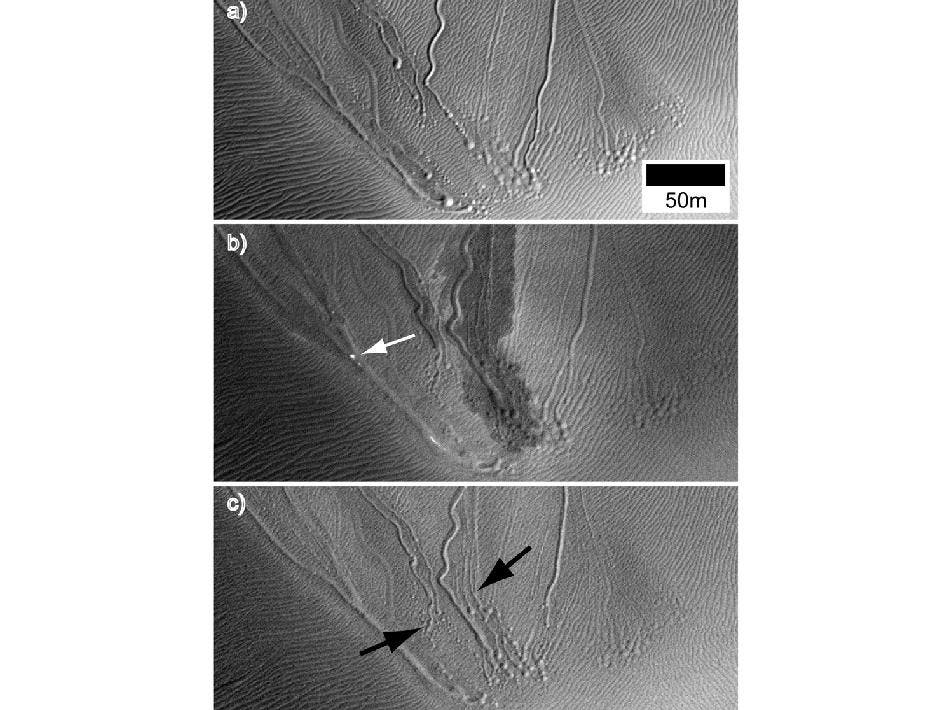 “In debris flows, you have water carrying sediment downhill, and the material eroded from the top is carried to the bottom and deposited as a fan-shaped apron,” said Diniega. “In the linear gullies, you’re not transporting material. You’re carving out a groove, pushing material to the sides.”

The thing is, when you’re thinking about Mars, you have to take into consideration that different processes shape the face of the planet. You don’t have an atmosphere for example, or a magnetic field, or tectonic plates.

“Linear gullies don’t look like gullies on Earth or other gullies on Mars, and this process wouldn’t happen on Earth,” said Diniega. “You don’t get blocks of dry ice on Earth unless you go buy them.”

So basically, you get these big chunks of dry ice which, when thawed, create a lubricant layer at their bottom, and start slipping down the dune; this is the magic of the Red Planet. Even though it is tectonically inactive, even though it doesn’t have an atmosphere – it is still very active.

“MRO is showing that Mars is a very active planet,” Hansen said. “Some of the processes we see on Mars are like processes on Earth, but this one is in the category of uniquely Martian.”

It’s very likely that this phenomena is unique in our solar system, but this doesn’t mean that all gullies on Mars were formed this way..

“There are a variety of different types of features on Mars that sometimes get lumped together as ‘gullies,’ but they are formed by different processes,” she said. “Just because this dry-ice hypothesis looks like a good explanation for one type doesn’t mean it applies to others.”