by Mihai Andrei
in Animals, Geology
A A

New Zealand is home of some of the world’s weirdest animals, and things weren’t very different 24 million years ago either: a huge penguin, measuring 1.3 meters tall was found by paleontologists. 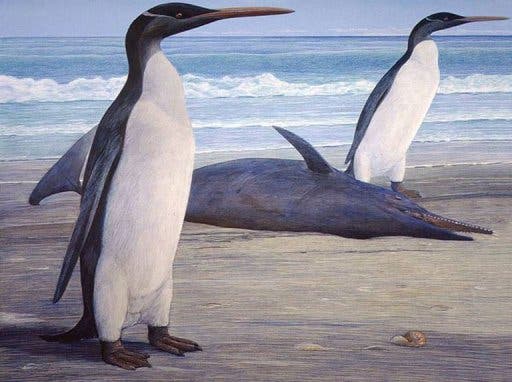 During the time the penguin lived, New Zealand was mostly underwater, and the only shelter it provided was in the form of isolated, small rocky outcrops which offered plenty of food and protection from predators. Kairuku, as it has been named, means “diver who returns with food” in Maori, and it was found on cliff at Waimate in the South Island. Even though it weighed 60 kilograms (twice as much as the Emperor penguin), it was an elegant and majestic creature.

“Kairuku was an elegant bird by penguin standards, with a slender body and long flippers, but short, thick legs and feet,” University of North Carolina specialist Dan Ksepka said.

It is still uncertain why the penguin went extinct, but most likely causes indicate an increase of predation from dolphins and seals. The findings were published in the Journal of Vertebrate Paleontology.