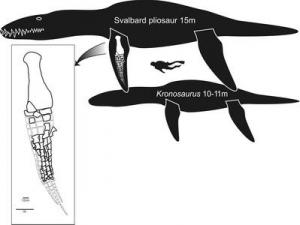 About a year and a half ago, the Natural History Museum in Oslo, Norway had announced the discovery of one of the largest dinosaur-era marine reptiles ever found; we’re talking here about a 15 meters (50 feet) feet long sea predator known as a pliosaur.

This fossil (of over 150 million years of age) was found in the summer of 2006 by a team of Norwegian paleontologists and volunteers from the University of Oslo Natural History Museum, led by Dr. Jørn Hurum. It was not far away from the shore, 1300 km (800 miles) from the North Pole. Meanwhile, they have not been just standing around; they’ve been preparing and studying this fossil, conserving it really well.

Pliosaurs were large reptiles that averaged 5-6 meters (16-20 feet) in length. One of the largest pliosaurs known is the Australian giant Kronosaurus , which measures in at 10-11 meters (33-36 feet) long. But since this one was about 15 meters that makes it the biggest pliosaur. More details can be found here

“Not only is this specimen significant in that it is one of the largest and relatively complete plesiosaurs ever found, it also demonstrates that these gigantic animals inhabited the northern seas of our planet during the age of dinosaurs” said Dr. Patrick Druckenmiller, a plesiosaur specialist at the University of Alaska Museum, and a member of the expedition that found and excavated the fossil.