New method spots counterfeit food and medicine for cheap, by filming how it freezes

Identifying adulterated medicine and foodstuffs can be as easy as hitting ‘record’, thanks to a new study.

You’ve heard of fake news, now get ready for fake foods. While people still have trouble spotting the former, the latter may much easier to weed out thanks to new research at the University of California Riverside. The study, led by William Grover, an assistant professor of bioengineering at UC Riverside, details a simple new technique that can detect fake drugs and food from a video taken as the sample undergoes a change, such as those induced by temperature.

I feel a disturbance in the food

“By basically converting a chemical sample to an image, we can take advantage of all the different image analysis algorithms that computer scientists have developed,” says Brittney McKenzie, a doctoral student in Grover’s lab and the paper’s co-author. “And as those algorithms get better, our ability to chemically identify a sample should get better, too.”

Counterfeit or watered-down food and drugs are a real issue. Roughly 10% of all medicine in low- and middle-income countries are counterfeit, according to the World Health Organization (WHO). The organization also adds that food fraud costs consumers and industry billions of dollars, around the world, year after year, while also risking the health of us laypeople.

So let’s do something about that, right?! Well, we’re trying, but it’s neither easy nor cheap to spot these fakes; it also requires expensive equipment and trained experts to pull off successfully. Both of these are hard to come by in low- and middle-income countries.

That’s why the team wanted to develop a method of spotting counterfeit or adulterated drugs and foods just by looking at them. Their approach relies on the same image analysis algorithms that categorize photos on social media platforms, for example. This type of software can quickly find all the photos of a given person or place, for example, by analyzing the picture itself.

The team says that the same principles can be used to distinguish authentic from adulterated drugs and food by observing how they behave when disturbed by temperature changes or other causes. Two substances with identical compositions should respond the same way to a disturbance. If two substances appear identical but respond differently, their composition must be different, the reasoning goes.

To test this idea, the team loaded samples of pure olive oil (one of the world’s most commonly adulterated foods, the paper explains), pushed them into tiny channels on a microfluidic chip, and chilled it quickly in liquid nitrogen. The whole thing was filmed using a USB microscope camera. The team then wrote a piece of software that converts this video to a bitmap image — because the image showed how the sample changed over time, the team christened their approach “chronoprinting.”

Several timelines of the pure olive oil’s chronoprints (taken over multiple tests) were fed through image analysis algorithms. The team reporting that they followed a reliable and recognizable pattern. 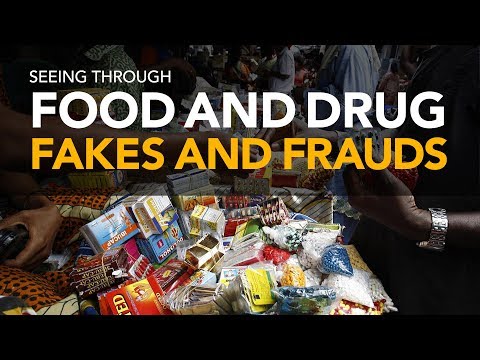 Next, they repeated the experiment with samples of diluted olive oil and cough syrup. The differences were immediately obvious, they write, and very consistent. Thus, they explain, image analysis algorithms can reliably detect some types of food and drug fraud.

“The significant visual differences between the samples were both unexpected and exciting, and with them being consistent we knew this could be a useful way to identify a wide range of samples,” McKenzie said.

While the team’s study focused on liquid materials, they say it can be applied to solid matter dissolved in water. It can also be applied to other types of disturbances as well, such as heating or a using centrifuge, in case the sample doesn’t react well to freezing. It doesn’t take any experts to use, it can be ran using hobby-grade equipment, and the software can be downloaded for free from Grover’s lab website.

In other words, the technique is flexible, straightforward, and cheap. Fake pill pushers everywhere, beware!

The paper “Chronoprints: Identifying Samples by Visualizing How They Change over Space and Time” has been published in the journal ACS Central Science.