by Jordan Strickler
in News, Science, Space
Reading Time: 3 mins read
A A
Share on FacebookShare on TwitterSubmit to Reddit 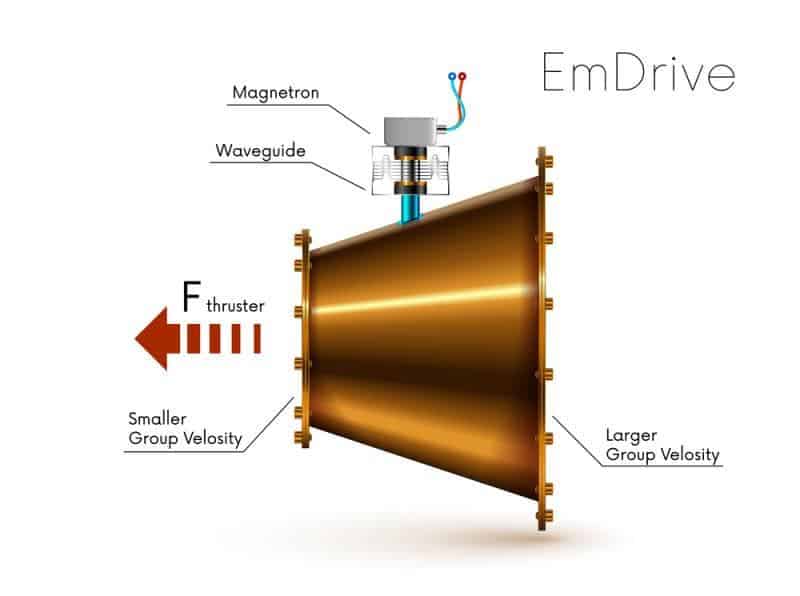 Never let physics get in the way of a good propulsion system. A group of scientists at Germany’s Technische Universität Dresden isn’t doing just that. Led by physicist Martin Tajmar, the team is conducting new studies in the fabled world of the EmDrive, hoping to end the debate once and for all.

For nearly 20 years, scientists have debated the viability of such a system; one that could power a spacecraft without fuel. Even using today’s most powerful rocket engines, it would take 50,000 years to reach our closest interstellar neighbor. An EmDrive (Electromagnetic Drive), on the other hand,  would drastically speed things up.

Still just a hypothetical engine, the EmDrive works by converting electricity into microwaves and channeling this electromagnetic radiation through a conical chamber. In theory, the microwaves would exert force against the walls of the chamber which would produce enough thrust to propel the spacecraft. First proposed by the British scientist Roger Shawyer in 2001, the idea of the EmDrive would bend the rules of physics since it would essentially create force out of nothing, thereby breaking Newton’s Third Law.

Many scientific groups, including NASA and DARPA, have dabbled in the EmDrive black arts, however, none have truly succeeded. While some have claimed success, any observations of thrust in the experiments were so small, a true confirmation could not be claimed.

Tajmar’s group have set out to create a measuring device so sensitive and immune to interference, that it could truly measure these tiny bursts with accuracy. Dubbed the SpaceDrive project when created late last year, Tajmar says that a resolution to the EmDrive could only be a few months off. The group hopes to publish their results in the journal Acta Astronautica in August according to Wired magazine.

In 2016, Tajmar and 25 other scientists attended the first conference dedicated to the EmDrive and related exotic propulsion systems. It was here that two NASA scientists, Paul March and Harold White, provided a presentation on work testing various EmDrive prototypes. It was from this research that Tajmar and his group modeled their own EmDrive prototype. After 55 experiments, his team walked away without any huge victories as the forces they found were more like due to thermal expansion than any real thrust. They are hoping that their new research will shine a better light on this and other previous studies to see if they had actually produced true thrust.

While it is universal knowledge that rockets just won’t cut it in interspace travel, it has always been up in the air as to what could exactly be a ship’s main source of propulsion. Photon rockets or solar sails have thrusts so low that maybe only nano-scaled spacecraft may reach the next star within our lifetime using very high-power laser beams. Unless the experiments go the way of cold fusion, this leaves the EmDrive as one of a few potential propellantless options in the driver’s seat.

So while it seems that EmDrive technology has always been just around the corner, if Tajmar’s experiment is successful, that corner could take a tighter turn in August.