The pomato is produced by grafting a tomato plant and a potato plant.

by Mihai Andrei
in Green Living, Home science
Reading Time: 2 mins read
A A
Share on FacebookShare on TwitterSubmit to Reddit

The pomato plant exists (feel free to call it tomtato, I just swing between the two names), and is produced by grafting a tomato plant and a potato plant. They yield both potatoes and tomatoes without affecting the quality of the crop. 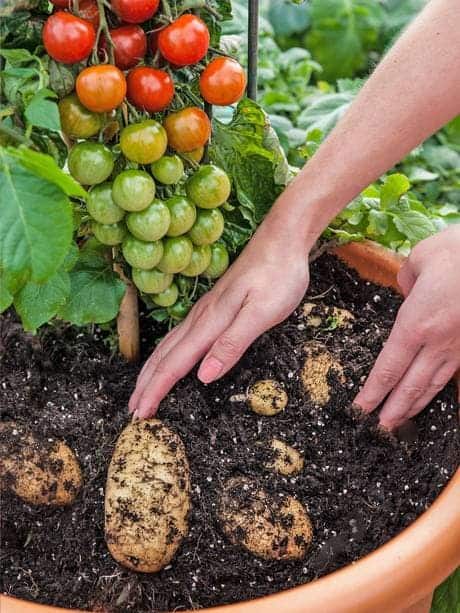 Even though they may not strike you as related, both these plants are part of the same family – the Solanaceae (nightshade) family. Although these plants can’t be crossbred, they can be grafted, and thus growing both tomatoes from the tomato shoot and potatoes from the rootstock, saving valuable space in gardens and fields.

How to grow a pomato/tomtato plant

Benefits of the pomato plant

The tomtato plant has been launched in the United Kingdom in September, 2013 by a horticulture company called Thompson & Morgan; it is not genetically engineered – it’s created through grafting, and can be grown both indoor or outdoor.

Pomato plants have been seen as a new technology to make crops more efficient, maximizing the yield that can be produced on a piece of land or in a small urban environment like a balcony. Interestingly enough, this idea was initially implemented in a Kenyan prison garden, to fight the hunger which was a big problem. They have already started implementing not only tomatoes and potatoes, but also cherry tomatoes and sweet potatoes. In developing countries such as Kenya (and not only), this technique can save on space, time and labour without affecting the quality of their produce by growing tomtato plants. Grafting can also improve resistance to bacteria, fungi, and other pests.