The science of laser hair removal, in slow motion

by Alexandra Gerea
in Home science, Videos
A A

Laser hair removal has picked up a lot of steam, becoming one of the most popular cosmetic treatments in the world. It’s the process of removing unwanted hair by means of exposure to pulses of laser light that destroy the hair follicle… but how does that work? This video explains it, in almost excruciating detail (hair removal starts at 0:56): 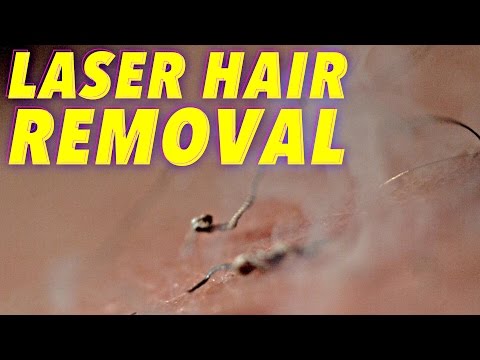 Here, Derek from Veritasium has a few shoulder hairs burnt by a few ultra-fast bursts of a laser set to a wavelength of 1,064 nanometres. That puts it in the infrared radiation wavelength – invisible to the human eye. The main principle behind this technique is called elective photothermolysis (SPTL). It’s basically matching a specific wavelength of light and pulse duration to obtain optimal effect on a targeted tissue while not damaging the surrounding tissue. The technique was developed experimentally for two decades before being finally adopted by cosmetic workers in the late 1990s.

Light is absorbed by dark objects, so most of the laser energy gets absorbed by the hair. For this reason, laser hair removal works best with coarse, black hair. Light skin and dark hair are an ideal combination, but some success can be obtained with darker skin and lighter hair. The interesting thing about this technique is not only that it removes hairs – but that it also stops them from growing back. The laser kills the germ cells in the follicles that produce the hair in the first place.

Its efficacy is undeniable, and science says the method is safe if done properly, so if you have some unwanted hair you want to get rid of, laser could be your friend – even if it looks scary.