Geothermal-powered greenhouse in Nebraska produces fresh citrus all year round

A Nebraskan entrepreneur brought his own take on greenhouses, creating one that's powered by green, geothermal energy.

by Mihai Andrei
in Home science, News, Renewable Energy
A A

A Nebraskan entrepreneur brought his own take on greenhouses, creating one that’s powered by green, geothermal energy. He’s now receiving more demands to sell his design.

“There have been hardly any successful 12-month greenhouses on the northern High Plains because of the weather,”says Finch, a retired mailman turned geothermal greenhouse engineer. He adds, “The cost of energy is too high for it. But by tapping into the Earth’s heat, we’ve been able to drastically reduce the cost.”

The greenhouse design is also creative; it’s a take on a walipini, or pit greenhouse. The floor is dug 4 feet beneath the surface, and the roof is slanted towards the sun to catch as much light and heat as possible. During the day temperatures easily go over 80 degrees Fahrenheit (25 Celsius), but after dark, temperatures plummet – and this is where Finch uses geothermal heat. Warm air is taken from perforated plastic tubing that is buried underground. Air circulation is ensured by a simple fan.

His greenhouse uses a geothermal system that goes only 8 feet down (2.5 meters) down, where the temperature is a stable 52F (about 11 Celsius). This ensures that when it gets really cold, temperatures are high enough to allow his greenhouse plants to survive. 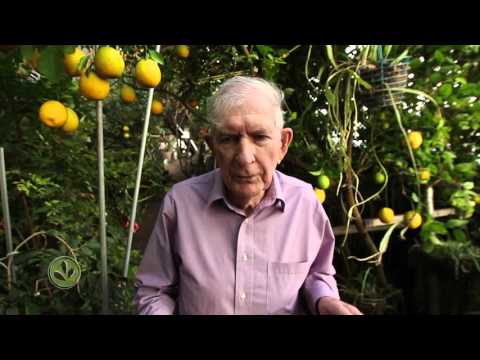 “All we try to do is keep it above 28 degrees in the winter,” Finch says. “We have no backup system for heat. The only heat source is the Earth’s heat, at 52 degrees at 8-foot deep.”

It wasn’t easy for him, and the entire project required several trial-and-error iterations. In total, the investment cost about $22,000, but by the time it was all done, electricity costs were only $1/day.

He also tried several types of fruits to see what grows best in the conditions he created. He ultimately settled on Valencia oranges and figs, which he can sell at local markets throughout the year. With his design, he makes a few hundred pounds every year to sell, but his main source of income has become the design itself – so far, he’s sold 17 of them in US and Canada, including one in nearby Alliance, Nebraska, where students grow tomatoes, cucumbers and other vegetables to serve in school lunches.