90% of foods endorsed by professional athletes are junk food

by Mihai Andrei
in Home science
Reading Time: 2 mins read
A A
Share on FacebookShare on TwitterSubmit to Reddit

Out of 512 brands endorsed by 100 top athletes, nearly a quarter of them (122) were for food and beverages – 44 different brands in 2010 (some brands had more products). A study conducted by researchers from Yale, Stanford, Duke and Harvard universities showed that almost 80% of all the 49 food products were “energy-dense and nutrient-poor,” and 93% of the 73 beverages got all of their calories from added sugar – basically, junk food. 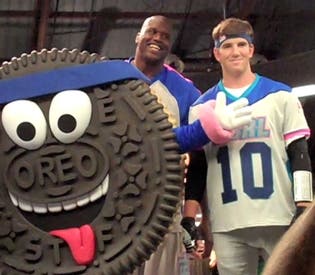 It’s strikingly ironical to have the fittest people on Earth promote some of the worst products on Earth – especially considering that their main target are teenagers – adolescents aged 12 to 17 are the people who saw most of the commercials, explained Marie Bragg of Yale’s Rudd Center for Food Policy and Obesity.

“It would be ideal if athletes stopped promoting unhealthful food,” Bragg said. “But that’s a tall order given how much money is involved.” But, she said, she hopes to see such endorsements become a liability for athletes.

Meanwhile, the companies who promote these products apparently don’t give a damn about this and quickly wash their hands on the whole thing by saying they don’t advertise to children:

The American Beverage Assn., a trade group, issued a statement saying, “America’s beverage companies have a longstanding commitment to responsible advertising and marketing practices, including not directing advertising to audiences comprised predominantly of children under 12.”

But when a top athlete earns a several million dollars a year by endorsing such products, things aren’t going to change. The only thing that we can do is take a healthy dose of skepticism when it comes to athletes endorsed foods and beverages.