It's a great way to spend an afternoon or a day off.

The world-renowned Field Museum of Chicago, Illinois has a new prehistoric creature display gracing their halls and galleries. The place has been decked out with fossil reconstructions and artistic representations of a variety of prehistoric animals. Most famous, of course, are those of the dinosaurs — and one of the newest additions is Antarctic Dinosaurs.

Around 195 to 235 million years ago (an era which encompasses the Triassic period as well as a small portion of the Jurassic period), Antarctica was quite different from its modern-day appearance. The Antarctic would have been closer to the equator, making for a lush habitat filled with “rhinoceros-sized dinosaurs and crocodile-sized amphibians,” says Kate Golembiewski, the public relations/science communications manager at the museum. 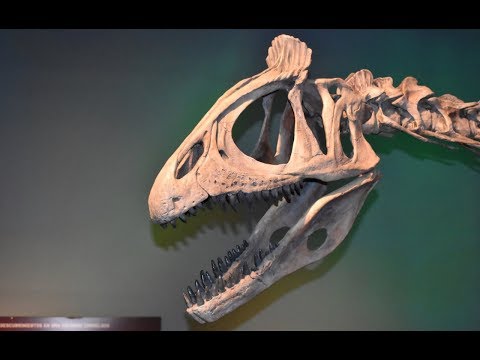 The exhibition includes hands-on interactive sections which can bring out the child in everyone. A significant portion of the exhibit is dedicated to the history of Antarctica in respect to man’s journeying there and learning how to survive the harsh, frigid conditions. Altogether, there are four dinosaur species appearing in the exhibit.

Glacialisaurus, a herbivorous dinosaur, is included as is a group of small sauropodomorphs which were ancestors of the massive long-necked sauropods. The titanosaur Maximo, which is also on display at the Field, is an example of the towering sauropods which are thought to have evolved along this lineage.

Two of the dinosaur species on display were classified as sauropodomorphs. As yet, these new species have not been assigned personal scientific descriptions. The pride and joy of this entire display, however, is likely the Cryolophosaurus, a formidable predator of the area and era.

This carnivorous brute was a fierce hunter. The specimen present in Antarctic Dinosaurs measures 25 feet, which is not something you’d want to meet in a dark alley. Aside from the dinosaurs, there are other wondrous creatures which found their place in the exhibit.

It also features specimens of lichens, large amphibians, and even the skeleton of a sizeable aquatic carnivore known as Taniwhasaurus. It was a mosasaur, a relative to the giant marine animals depicted in the Jurassic World films, and is believed to have been able to reach lengths of close to 39 feet. It would have been a dangerous foe for any smaller swimmers of the Cretaceous period.

Altogether, the exhibit has something to offer everyone of every age, from child to adult, and of every interest, from history to paleontology, and is a great way to spend an afternoon or a day off.