This means being carnivores must have been an excellent solution for these plants.

by Tibi Puiu
in Biology, Science
Reading Time: 3 mins read
A A

Typically, animals are the ones that eat plants but there are instances where this goes the other way around. Carnivorous plants are not only a thorn in some vegan’s life philosophy — they’ve been bugging scientists since the time of Darwin. And for good reason, too. What did it take for carnivorous plants such as the pitcher plant to evolve the ability to derive some of their nutrients from flesh? Well, researchers from University at Buffalo might have finally found out how carnivorous plants evolved.

The researchers analyzed the pathways necessary for a carnivorous plant to evolve, particularly in the pitcher plant. The pitcher plant doesn’t have ‘jaws’ like the famous Venus flytrap, immortalized by bad B movies and Sunday morning cartoons, but that doesn’t make it any less deadly. To attract unsuspecting prey, the pitcher plant has a cup-shaped leaf which looks like a normal flower plant. The sides, however, are slippery and at the very center and a gooey liquid traps flies, bees, and other insects. The same liquid breaks down the insects’ exoskeleton turning them into dinner.

Take a look at the pitcher plant in action. 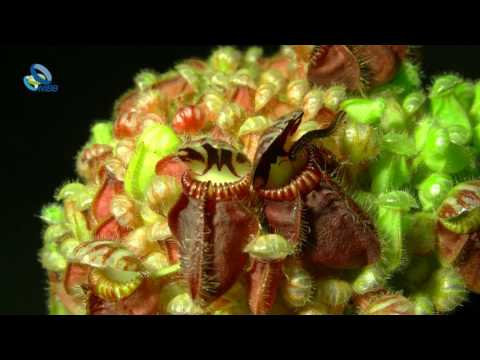 Initially, the researchers focused on the Australian pitcher plant (Cephalotus follicularis). They first sequenced the carnivorous plant’s DNA, then looked for genes that became activated in each of the plant’s two types of leaves — one is a plain leaf that does photosynthesis and the other variety is the death trap. This is how they found a group of genes that seem to turn on only in the pitcher leaf.

The researchers also took samples of fluid from inside the plant’s traps to analyze the stew of digestive enzymes and other proteins and compared them to fluid samples from the unrelated American and Asian pitcher plant species. They also looked at digestive juices in another carnivorous plant, a sundew, which has leaves with sticky little hairs that trap insects like flypaper.

Despite all of these plants are unrelated and evolved independently, they all use the same enzyme to digest prey. What’s striking is that the same genes from noncarnivorous ancestors have been recruited for carnivorous purposes. Namely, proteins originally involved in protecting the plants against diseases and other stressors eventually turned into digestive enzymes. This ability likely appeared as a means for the plants to cope with nutrient-poor environments. Trapping and digesting animals can be indispensable in this situation.

“These results imply constraints on the available routes to evolve plant carnivory.”

The present findings are a perfect example of so-called convergent evolution, the process by which unrelated or distantly related organisms evolve similar body forms, coloration, organs, and adaptations. For instance, another good example of convergent evolution are bats … and dolphins. Both evolved the same ability to produce, receive, and process ultrasound waves independently.

“It suggests that there are only limited pathways for becoming a carnivorous plant,” says University at Buffalo biologist Victor A. Albert. “These plants have a genetic tool kit, and they’re trying to come up with an answer to the problem of how to become carnivorous. And in the end, they all come up with the same solution.”