It’s a good day to be a chemist – a new, super-heavy element has been added to the periodic table after it was discovered by a team Germany’s GSI laboratory. 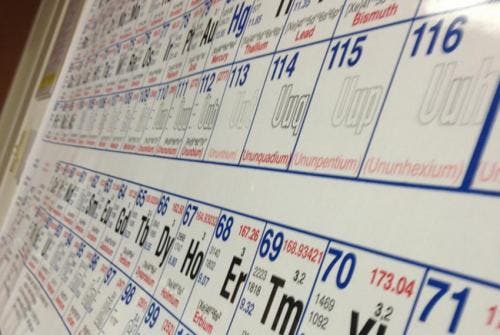 The periodic table was (and still is) the foundation for modern chemistry – it is a tabular arrangement of all the chemical elements, organized on the basis of their atomic numbers, electron configurations (electron shell model), and recurring chemical properties. When you refer to a chemical element and say that it is the first (Hydrogen), the second (Helium), and so on, that “1st” or “2nd” or “117th” is the atomic number – the number of protons found in the nucleus of an atom of that element – this is the fundamental way of characterizing a chemical element.

Most chemical elements you can find in nature, relatively easily, but as you go forward to heavier and heavier atoms, things start to get more strange. Atoms after the number 104 are called superheavy elements, and generally speaking, they don’t occur in nature, and are stable only for a limited amount of time.

Initial reports about the discovery of an element with atomic number 117 were released in 2010 in Dubna, Russia, one of the facilities most known for finding new, heavier elements. However, only now have researchers provided the first actual clear evidence for the 117 element.

ADVERTISEMENT
super-heavy element to be added to the periodic table following research published in the latest Physics Review Letters.

super-heavy element to be added to the periodic table following research published in the latest Physics Review Letters.