by Tibi Puiu
in Chemistry, Nanotechnology, Other
A A

The 2012 London summer Olympic games are just a few weeks away, and as millions are set to flock to the city and other hundreds of millions will rejoice on the web and TV at the world’s grandest spectacle of athletic performance, it’s pretty clear this is one of the most anticipated events of the year. Every four-years people all over the world offer their tribute to the competition, including scientists too, of course.

“When doodling in a planning meeting, it occurred to me that a molecular structure with three hexagonal rings above two others would make for an interesting synthetic challenge,” says Professor Graham Richards, an RSC Council member.

“I wondered: could someone actually make it, and produce an image of the actual molecule?”

A joint collaborative scientific effort comprised of scientists at the Royal Society of Chemistry (RSC), the University of Warwick, and IBM Research Zurich, have  imaged the smallest possible five-ringed structure. The researchers employed synthetic organic chemistry to build the Olympicene molecule, while scanning tunneling microscopy was used to reveal a first glimpse of the molecule’s structure. To image the 1.2 nanometres in width molecule, about 100,000 times thinner than a human hair, at an unprecedented resolution, like captioned above, scientists at IBM Zurich made use of a complex technique known as noncontact atomic force microscopy.

“Alongside the scientific challenge involved in creating olympicene in a laboratory, there’s some serious practical reasons for working with molecules like this,” says Fox.

“The compound is related to single-layer graphite, also known as graphene, and is one of a number of related compounds which potentially have interesting electronic and optical properties.

“For example these types of molecules may offer great potential for the next generation of solar cells and high-tech lighting sources such as LEDs.” 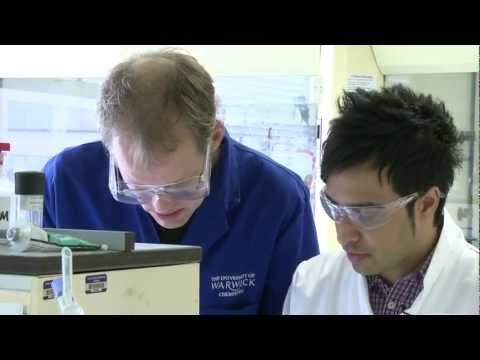