Chemists give Natural Gas an “upgrade”

The Natural Gas production is booming throughout the world – especially in the U.S. This boom, while it remains profitable in the short run and environmentally costly in the long run, is still a heated matter of debate, but this article isn’t about that. This is about the major opportunity that chemists now have to get creative in designing new methods for converting plentiful natural gas into fuels and chemicals that can better compete economically as alternatives to petroleum-derived products. Here’s what they’ve done. 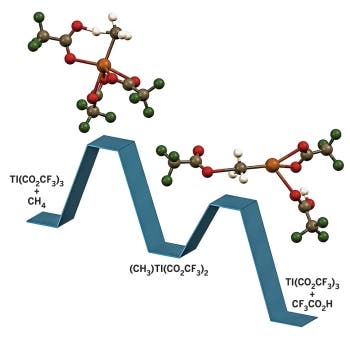 A research theam including Brian G. Hashiguchi and Roy A. Periana of Scripps Research Institute Florida and Daniel H. Ess of Brigham Young University has discovered a way to use inexpensive main-group thallium and lead complexes to convert the typically unreactive alkanes in natural gas into alcohol esters. Without getting into an advanced explanation on organic chemistry, alkanes are saturated hydrocarbons, colorless and odorless and typically unreactive. Esters are chemical compounds formed by condensing an acid with an alcohol. Transforming the alkanes into esters in a cheap and efficient manners has many potential applications – especially as this new chemistry operates more selectively and at much lower temperatures than conventional natural gas reforming methods that operate at about 900 °C.

Currently, all the commercial catalysts for oxidizing hydrocarbons such as propylene are based on solid metal oxides such as molybdenum oxide – and they can’t be used to process natural gas into alcohols; this is what this new technology solves. This is especially important because much of the new supply of shale gas is very rich in ethane and propane mixed with methane, Periana notes. Obtaining valuable substances from relatively cheap hydrocarbons is really remarkable, and the team is already discussing with several companies and entrepreneurs.

“Initial targets would be higher-value, lower-volume commodity chemicals such as propylene glycol or isopropyl alcohol directly from propane,” Periana says. “The next targets after that could be to develop lower-temperature processes for higher-volume chemicals, such as converting methane to methanol and ethane to ethanol or ethylene as inexpensive sources of fuels and plastics.”