Humans are inherently ill-suited to assess odds -- this book aims to help.

by Alexandru Micu
in Books, Mathematics, Reviews, Science
Reading Time: 4 mins read
A A
Share on FacebookShare on TwitterSubmit to Reddit

If life is a game a chance, knowing how to weigh your odds makes all the difference. 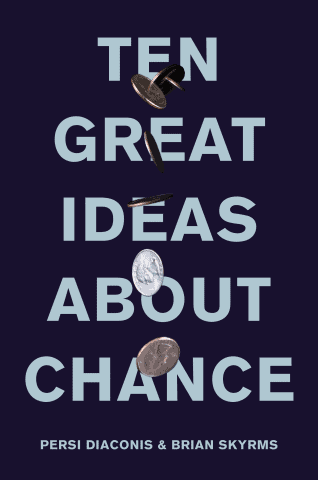 Throughout the sixteenth and seventeenth centuries, gamblers and mathematicians set the stage for a new line of thinking that would shape nearly every field today, from economics and finance to physics and computer science: they transformed chance from something that happens to you into a well-ordered discipline, something you can calculate and quantify. This book traces ten great ideas that shaped the field, exploring the mathematical, historical, philosophical, even psychological aspects of probability and statistics.

Accessible, yet meticulous in its math, Persi Diaconis and Brian Skyrms‘ Ten Great Ideas about Chance is an instructive but fun lecture.

The book was borne of an interdisciplinary course the two authors — one a mathematician and one a philosopher — taught at Stanford University. As such, it’s built on the assumption that you’ve had some prior experience with either statistics or probability. In case you haven’t, the authors included an Appendix with a brief rundown of the basic elements of probability.

Each of the ten great ideas discussed in the book gets its own chapter. The first will take you through a brief tour of the early days of probability theory, starting with the 1500s, and introduce the concept that chance is, in fact, something we can measure. Chapter 2 also deals with measurement, showcasing how probabilities can be measured in more complex situations that lack a finite collection of equally-probable outcomes.

The third great idea is that, as humans, we’re inherently bad at dealing with probabilistic concepts. One simple example that shows how much wording influences our perception is the operating room scenario: telling a patient that they have a 90% chance of surviving an operation, for example, is more likely to induce him to agree to the procedure than telling him he has a 10% chance of dying — despite that both statements mean the exact same thing.

The fourth and fifth chapter explores the connection between probability and frequency, followed by two chapters dedicated to Bayesian analysis. Chapter 7, titled “Unification”, binds all these together and cements the links between chance, probability, and frequency.

The following two chapters impart context to probability theory, showing how it relates to other disciplines. Chapter 8 deals with algorithmic randomness, the use of computers for random number generation, while chapter 9 looks at probability in the context of physics. The final chapter deals with Hume’s assertion that, in the authors’ words, “there is a problem of understanding and validating inductive reasoning.”

Should I read it?

Ten Great Ideas about Chance treats the topic from an unusual angle, and it will help any faculty members teaching probability by providing a fresh take. The book uses calculus quite freely, and a solid understanding of integral signs and limit arguments will come in very handy while navigating its pages.

But don’t get discouraged by the technical talk — the book packs this stuffy topic in a pleasant, easy to read format. As someone with only a summary education in the field, I can attest that even those of us who are newcomers to probability will find quite a lot of interesting information here, peppered with “aha” moments. Even if math wasn’t ever your cup of tea, Ten Great Ideas about Chance remains accessible — despite some chapters being quite challenging and likely to give non-specialists some hard times, most of the book (especially its earliest chapters) do a great job of conversing with a wide audience.

One feature I’ve especially appreciated is the inclusion of end-of-chapter summaries, as it really helped wrap my brain around some of the topics I’ve had difficulty with. Ten Great Ideas about Chance also features an annotated bibliography and appendices in many chapters, which treat topics the authors deemed too tangential or technical for the main body of the work.

All in all, it’s a great book for anyone who wants to understand some of the central tenets of probability, how they were discovered, and how they can be tamed in our day-to-day lives.